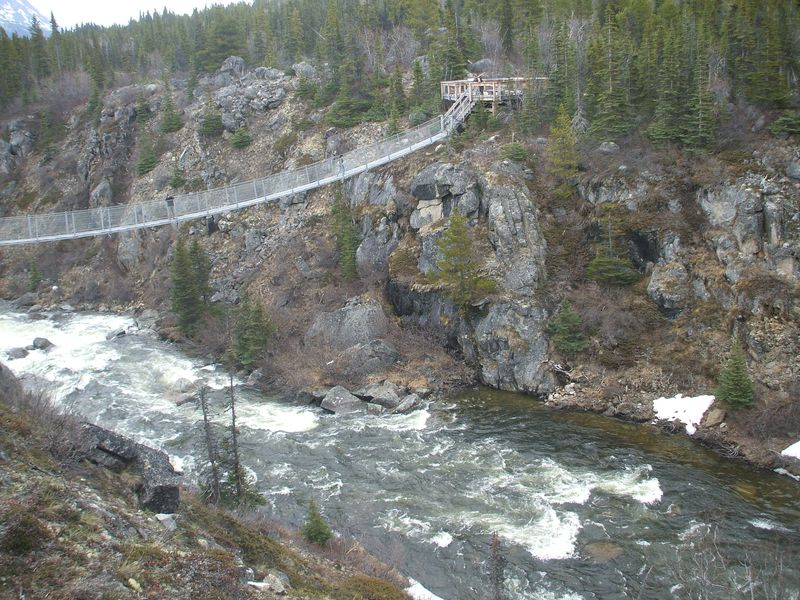 Go figure, Mike's first time in Canada, and the first place we arrive is the Yukon Territory, of all places! After our gold mining excursion and lunch in Skagway, we got into a bus and headed up to White Pass, with all its breath-taking, hair-raising scenery. We had an excellent bus driver who really knew his stuff and was very personable. 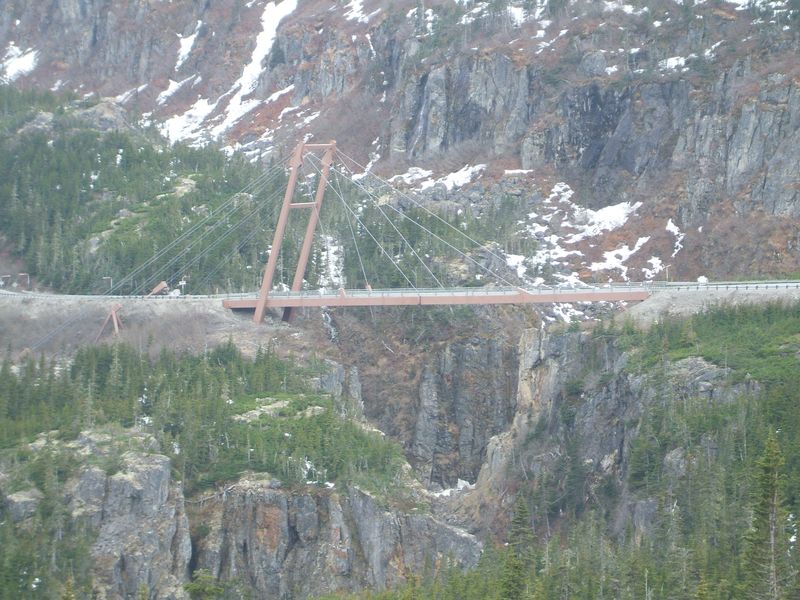 This is a neat bridge... since it spans a fault line, it is only attached on one side to allow for movement. The other side is just laying on top of a base. Buses can only go over it at five miles an hour, and one at a time. We learned a lot about the unique challenges of construction work in the mountains! We also enjoyed wonderful weather once again... and were thankful for the cloud cover when we got into the snow-covered areas where it might have been blindingly bright. 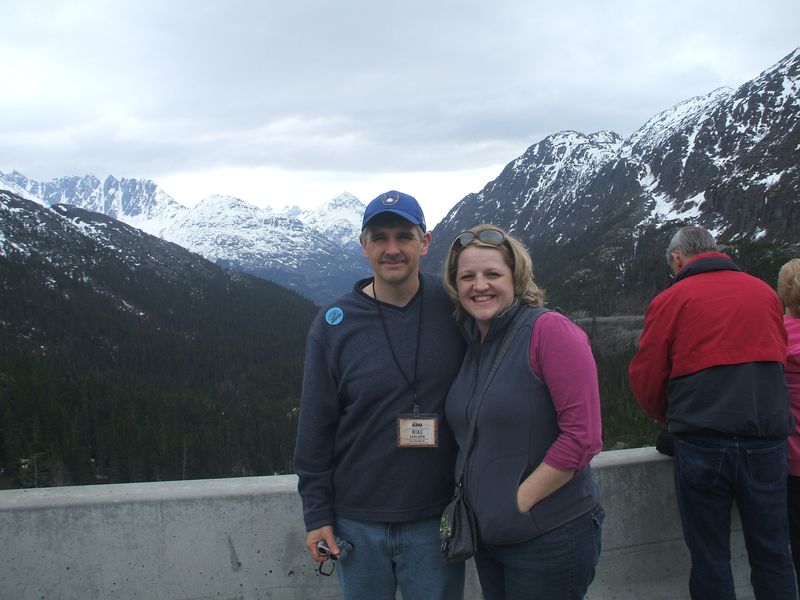 From this scenic overlook, we spotted a mother and baby mountain goat high on a ridge, but our camera was not zoomy enough to get a good picture. I definitely need to research digital cameras before we go on our next trip. Thankfully we had the small binoculars that Tracy H. loaned me--thanks, Tracy! They came in handy for all kinds of wildlife. 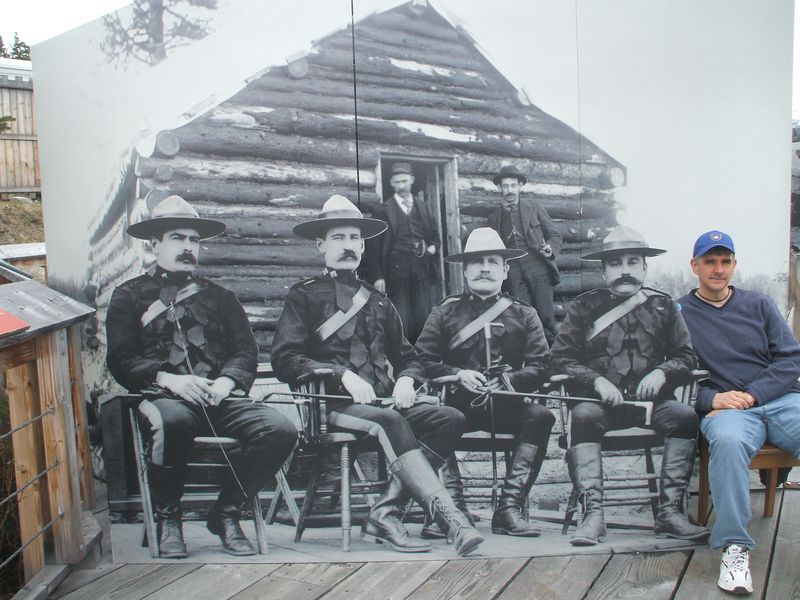 After passing through customs on the U.S./Canadian border, we followed the general route of the Trail of '98, learning about the Klondike gold rush and the hardships the men (and a few women and children) faced in their quest for gold, and the construction of the White Pass & Yukon Railway, completed in 1899 (unfortunately just in time for the gold to peter out). We stopped for a while at the Yukon Suspension Bridge, enjoying the interpretive center, the maple candies and birch syrup, and Yukon Jax, their friendly furry mascot! I wanted to take him home with us SO bad! 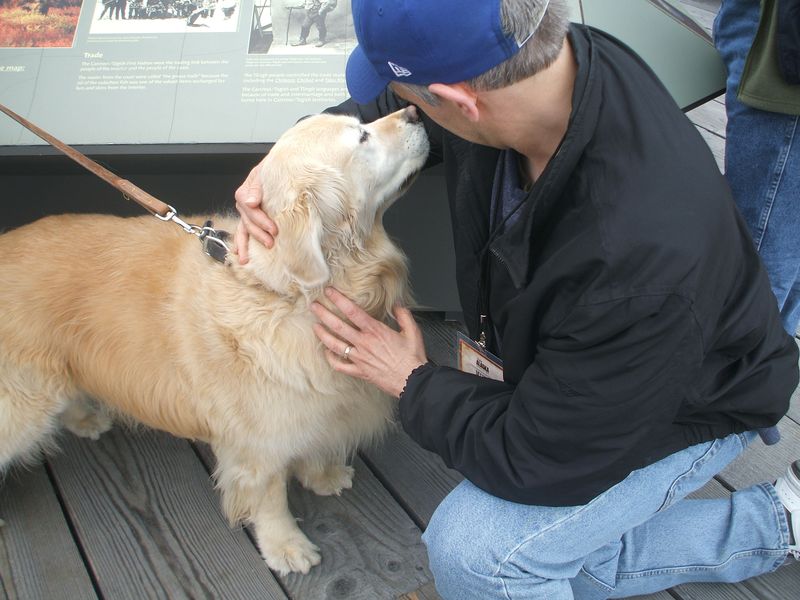 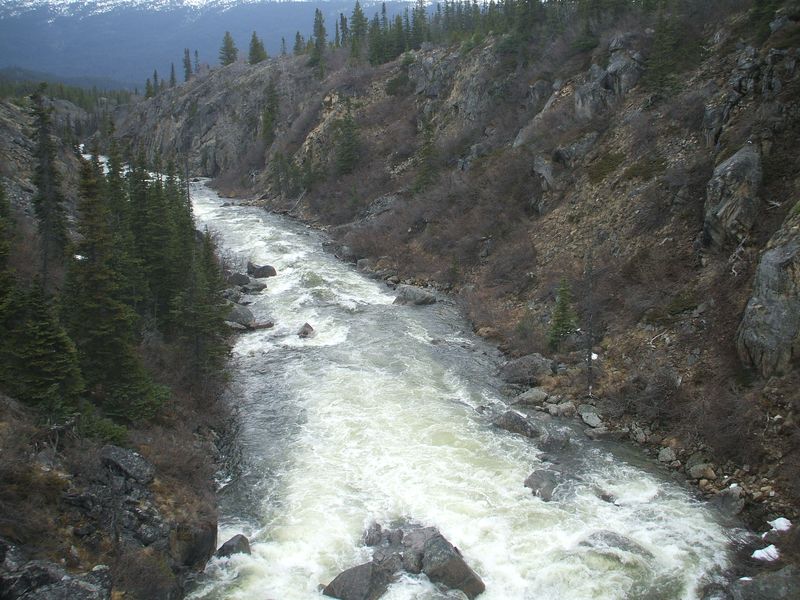 The pedestrian suspension bridge was fun and a little frightening, spanning as it does a very rough whitewater. Parts of the Yukon River are classified as Class 6 rapids, meaning they have never been successfully navigated. I can't even begin to think how cold the water must be! 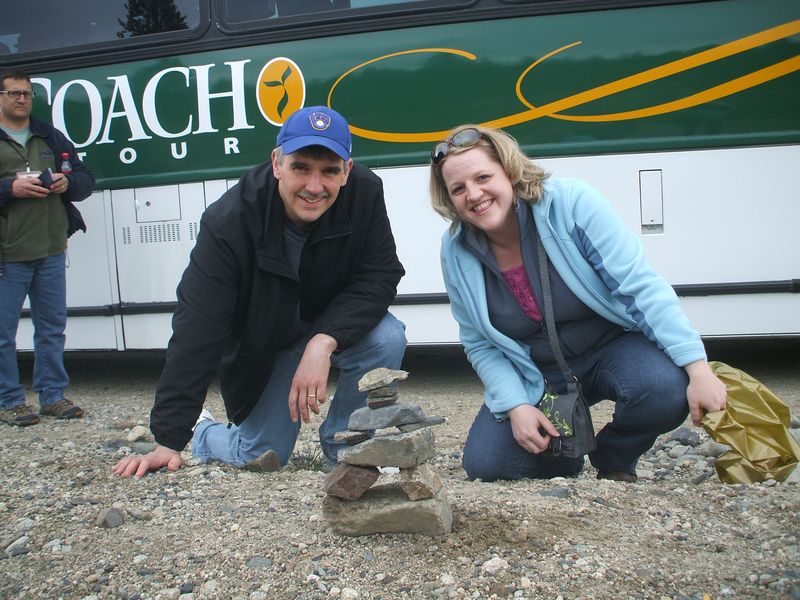 Mike and I had to make an inukshuk of our own after spotting them here and there in the desolate landscape. Inukshuk are little stone roughly-human-shaped monuments originally put up by native Inuit, serving as trail markers and signs of peaceful groups. Mine looks a little on the tubby side... but hey, so did I by that point in the cruise!

We'd had a fantastic time, and the day wasn't over yet. We coasted in to the train depot at Fraser and hopped aboard the train for a two-plus hour ride back down from White Pass and into Skagway. Postcard-perfect scenery in my next post!