Stamps I wish they made

"My husband said it was either him or scrapbooking....

.... I took pictures of him packing and made the cutest pages!"

--shared by my friend Stella

I always make sure to include some guy cards at my 10-10-10 Events--seems like those are the ones we never have enough of in our stash! There is no better set for masculine cards than The Open Sea stamp set. It is one of those great sets where everything you make with it turns out great. I think it's one of the best examples of why it's so great that Stampin' Up sells their stamps in sets (plus, it's way cheaper). Everything you need to make a variety of totally different projects is included in the set--and even stamps you thought for sure you wouldn't use, you wind up loving, and realizing that's why the stamp set artists get paid for what they do : ) Wouldn't that be a fun job?

I think Stampin' Up must be about the funnest place in the WORLD to work. Have you seen this hilarious video yet? I clean just like this gal does...

Sneak peek of my swap card for Founder's Circle 2012 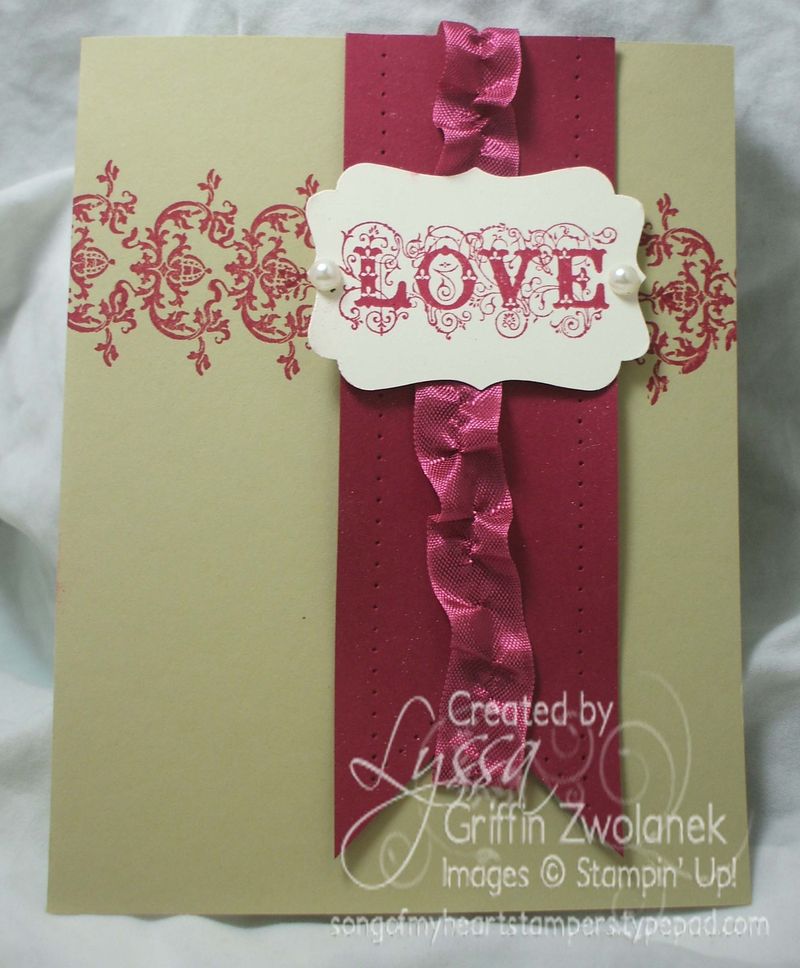 Someone at Stampin' Up made the same mistake for two years in a row now, and thinks I get to go to Founder's Circle AGAIN and hang out with the Top 100 Demonstrators in the company... I hope nobody clues them in that they can't possibly be right! Shhhh--don't tell them I'm just a nobody from nowhere!

Ahhh... I still don't believe it. Even with the travel documents right here on my desk, photos from last year to prove it really happened, and even an email from Bonnie Thurber yesterday asking me to present the business idea I submitted to them in front of the group--I still don't believe it! I was looking at the post I made this time last year (read it here) and I can hear my excitement and utter bewilderment that this lucky girl is me--this is MY life--I feel SOOOOOO blessed. Wow. Somebody pinch me!

Well, I know you want to hear about the CARD! This year, we had a challenge. We were limited to TWO layers plus the card base. Now, I normally LOVE stamping challenges and I have no problem making cards with two or even fewer layers. But somehow, KNOWING that I couldn't use more than two completely stumped my mojo! It took me a long time to make something I liked--that also fit all the criteria for mass producing 120 of them: nothing too labor-intensive, couldn't take too long per card, had to use embellishments and ribbon I could get in quantity, was easy enough on my carpal tunnel, etc. So this is what I came up with--be kind in your reviews : ) 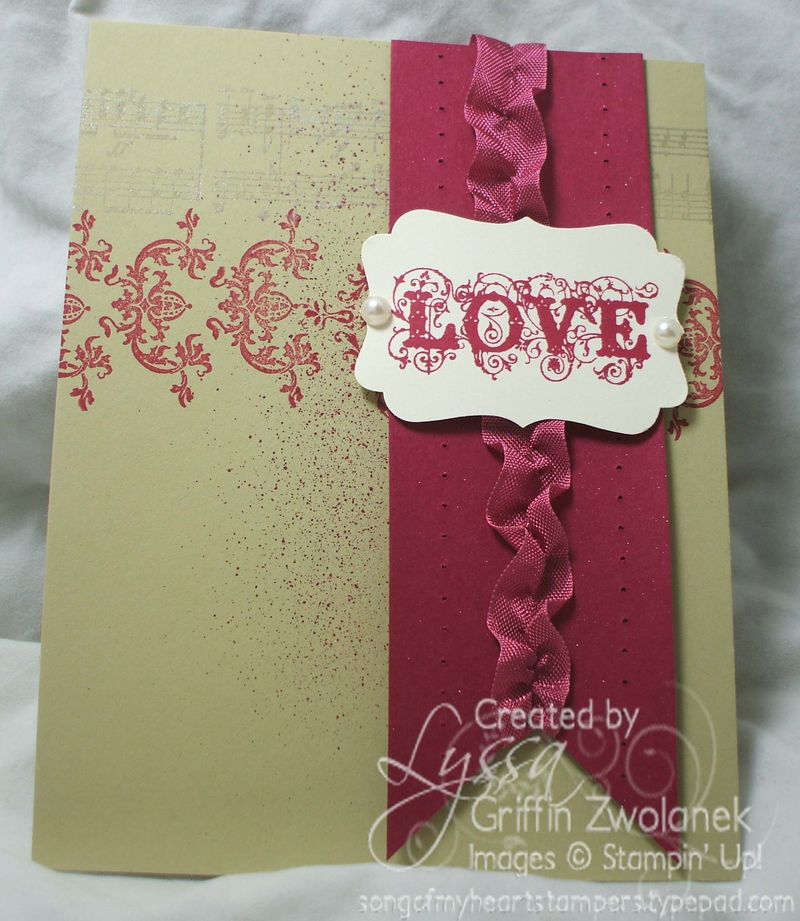 The first card was my rough draft, and then this one above is the stepped-up one I tried to fancy up a bit--without adding in any layers!--that I ended up going with. The base is River Rock, which goes GORGEOUSLY with the new Raspberry Ripple In Color--you need to try them together. The stamps are from the Affection Collection stamp set in the 2012 Holiday Catalog, page 35. I am really enjoying that stamp set! And I used the Music Notes wheel and the Color Spritzer Tool to easily add even more vintage-y layers to it with hardly any effort.

I have 70 out of 120 completely done right now, though all 120 bases are finished. The ribbon is what's taking the longest, but it looks so cool I am still plugging away at it. Taking a break from them to finish getting ready for my 10-10-10 Event on Saturday! Here is the version of this card that we will be making that day. Look at how gorgeous the new Illuminate Ink Pad is!!! 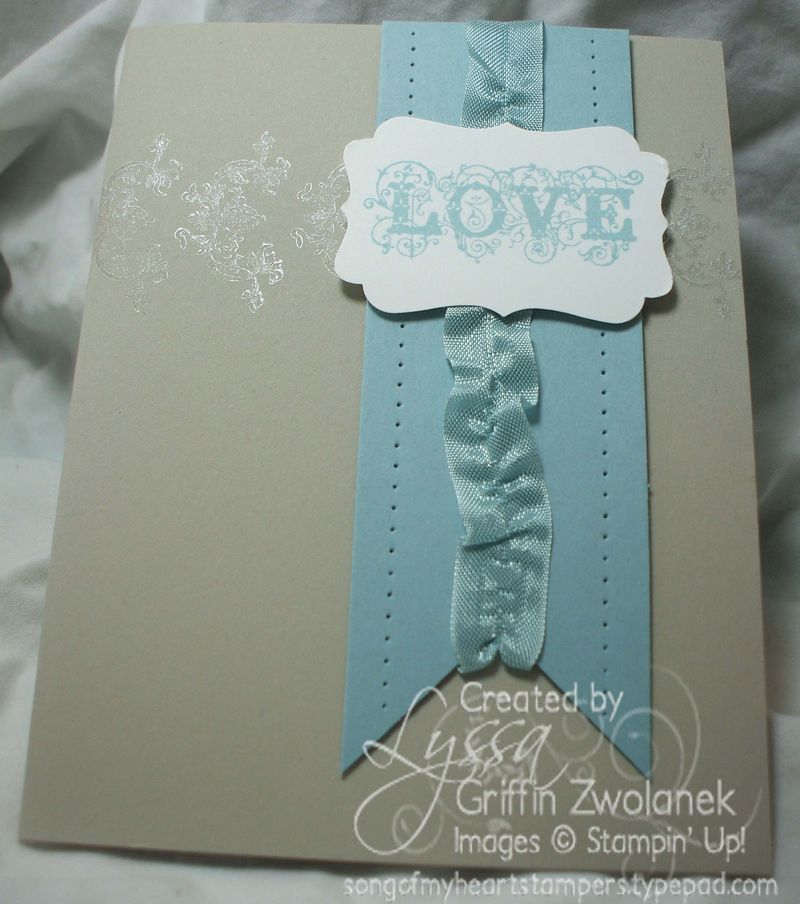 Now that I have my design safely in hand, I am kind of glad there was a two-layer challenge. I will be getting a lot of gorgeous swaps back with quick and easy ideas to share with you all. So many of us love the super-fancy, multi-layered masterpieces, but that is just not the kind of card we really do in everyday life! It will be fun to see what everyone has come up with. I hope they like mine! Leave me a comment if you like it! 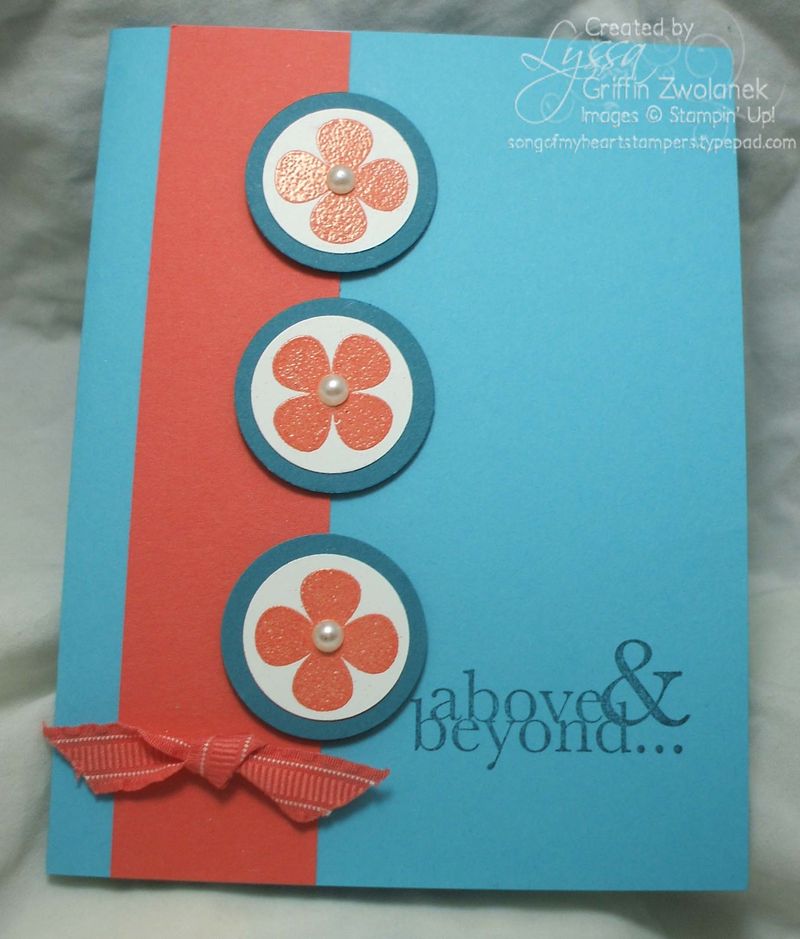 Join us as we try out lots of fabulous new tools and products from the 2012 Holiday Catalog and make ten completely different cards! Learn ten new layouts and color combinations as you snack and chat your way around the room, working at your own pace. Bring your own adhesive.

As I posted on Facebook yesterday, I could hardly believe I was saying it, but I was going to the Rock River Thresheree again. I hadn't been there since I was a newlywed (guess they figured once the ring was on it was safe to start breaking me in). Now we have kids clocking in at 8 and 10 these days.... so it was time! Look at those happy three generations there... is that a great picture or what?

My husband comes from a machinery-lovin' family and there is no better place to explore your roots, apparently, than this annual antique tractor and farm machinery show. It is LOUD, and smoky, and LOUD, and earth-rattling, and did I mention LOUD? And smoky? And literally earth-rattling? 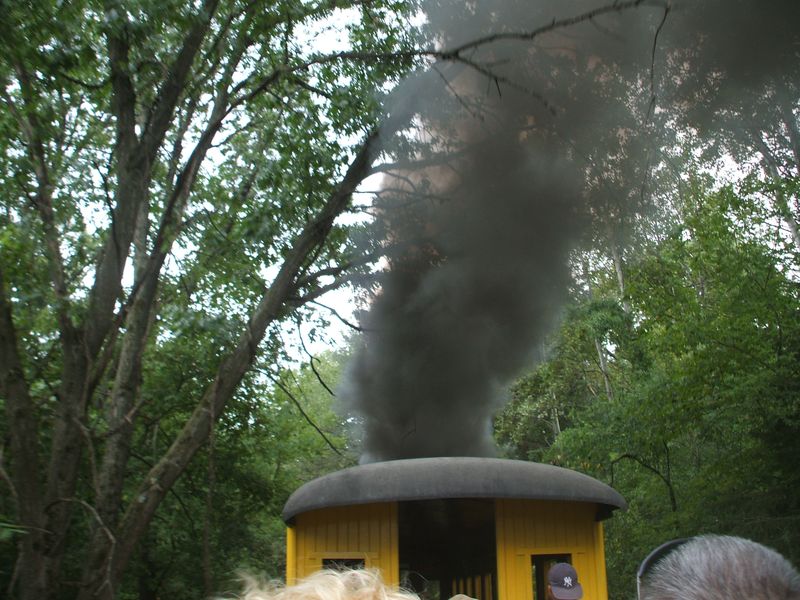 "Let's sit in the open car," I said. "It'll be cooler." Oh my. I had no idea we'd look like chimney sweeps by the time we were done with the train ride. The plume in this picture was more often coming straight down on us. No wonder the windows were nailed shut on most of those old trains!

Natalie was happy... we were talking about the different colors tractors come in on the way there, and she was disappointed they don't come in pink. Turns out, a few actually DO. It made her day! 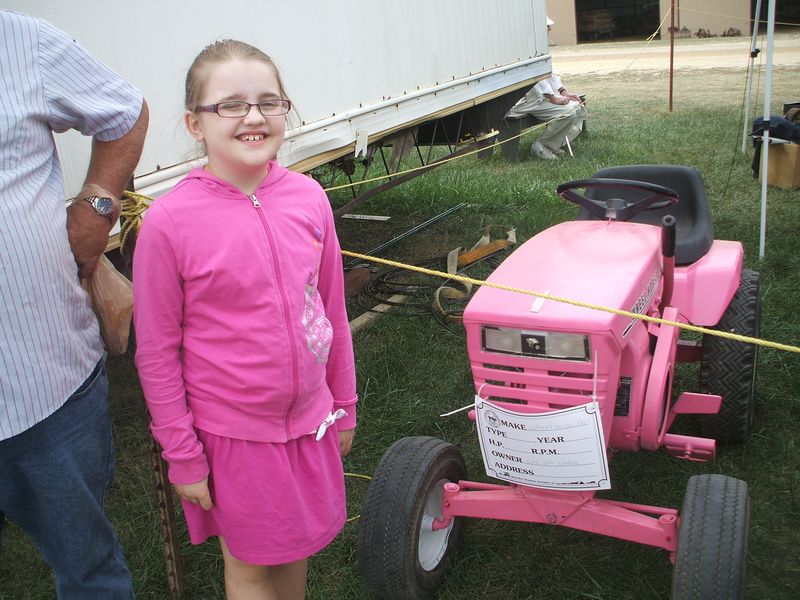 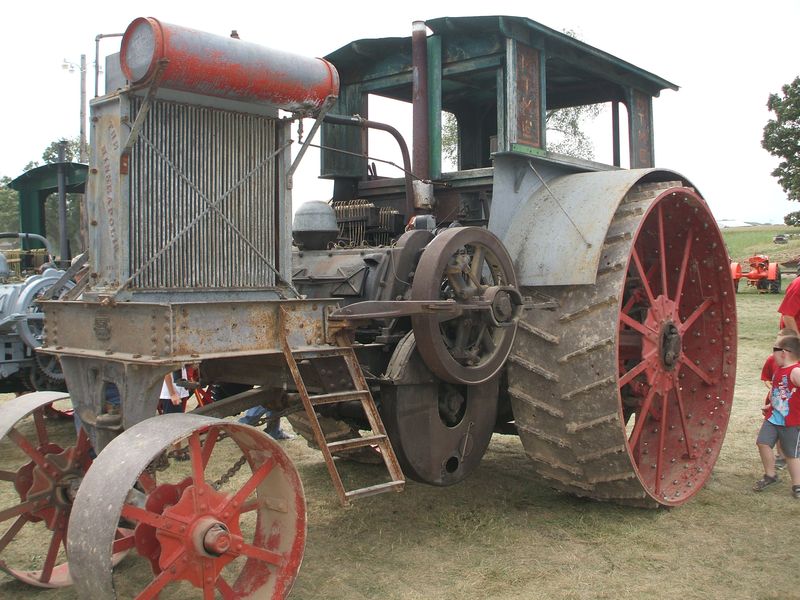 Actually, all kidding aside, we had a great time. Natalie did make use of the emergency ear plugs that have saved our bacon a time or two since I stuck them in my wallet a while back. And I liberally treated to the corn boil, root beer floats, pickles on a stick, and kettle korn as a maybe-not-so-subtle bribe... Not gonna lie, my favorite part of the Thresheree is the funnel cakes. But the fact that there is an enormous flea market that I can browse during the "parade" (read: endless succession of tractors that look all alike but don't make the mistake of thinking they ARE all alike) redeems the event for me. And there were lots of truly interesting historical things like WWII reenactors, a pile-driver, a sawmill, a blacksmith, a working thresher, tobacco harvesting and even mule teams.The event is in it's 56th year, and it's really grown since I last attended. 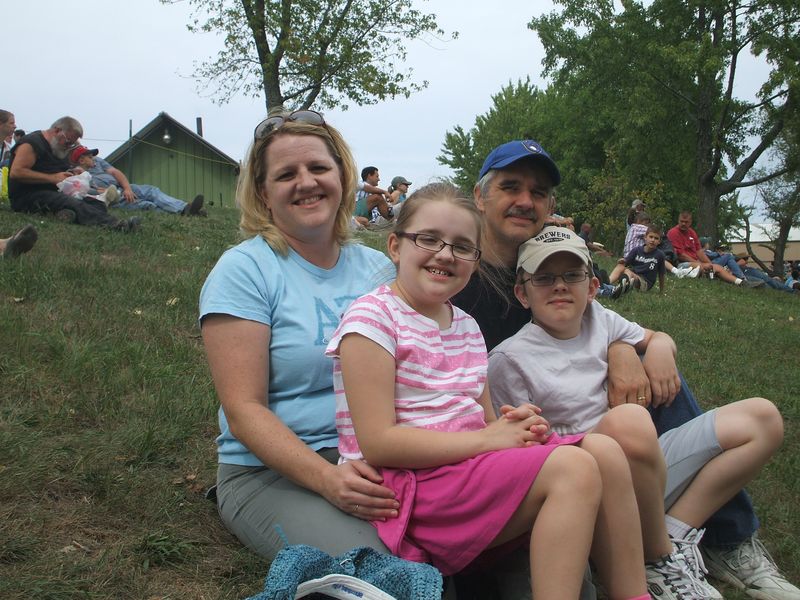 We came home with cornmeal they ground right there in a stone mill powered by an engine that was 110 years old (see, I was paying attention), cedar roofing shakes that smell marvelously, a couple of flea market finds, and no desire for dinner anytime soon. The kids did brilliantly with it all--I was braced for a plethora of sensory processing issues--and here we lasted over four hours, leaving Grandpa and Daddy behind for a couple more hours over in the car show area. I love my man, but a girl has to draw the line somewhere. 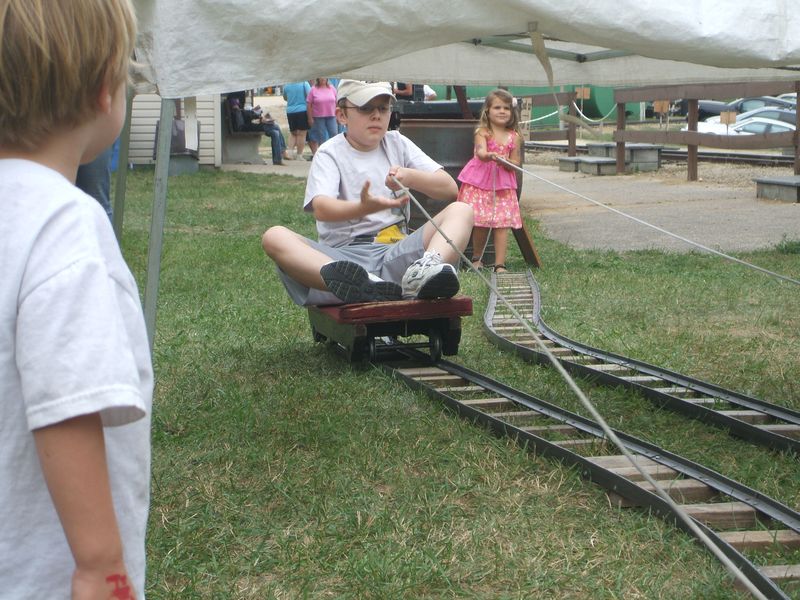 I appreciated getting to show the kids a little bit of their heritage. We ALL come from agricultural backgrounds, if you go back far enough. And for city-raised kids (and their parents) it's always a good reminder that the food in the supermarkets doesn't get there by itself, and it wouldn't get there at all or in such abundance if not for the innovations and hard work of the people that came before us. It made me proud to be from America, where people are allowed to thrive on their own determination and ingenuity and make a better country for us all. Like Dan on the little train cart ride--the harder you pull, the faster you go... So it was a good day... one I enjoyed rather than endured, turns out. I wouldn't be surprised at all if the kids decide they want to go again next year. Me, I'm kinda glad it's an annual thing. I have train grit in my ears, which are still ringing ...