Into the Village - Song of My Heart Stampers 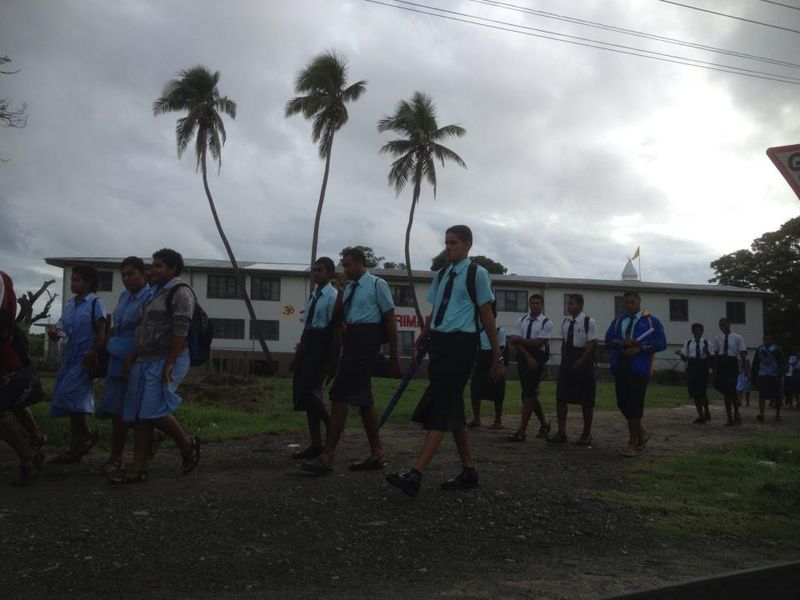 On one of our last days in Fiji on the Stampin' Up annual Grand Vacation incentive trip, we got together with three other couples and headed out in taxis for a personalized tour. We couldn't leave the area without visiting a village. We were so glad we did, because we got a real flavor for village life and had a remarkable experience in the local church.

There was much to see even from the taxi windows, like these college students, the males wearing the traditional sulus. We drove through Nadi and headed out around the western coast of the island, with gorgeous views of the Sleeping Giant. 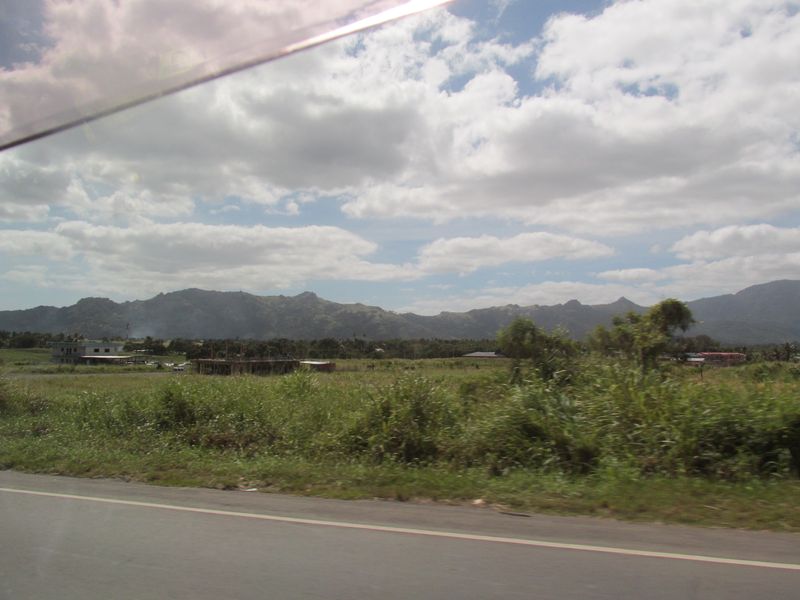 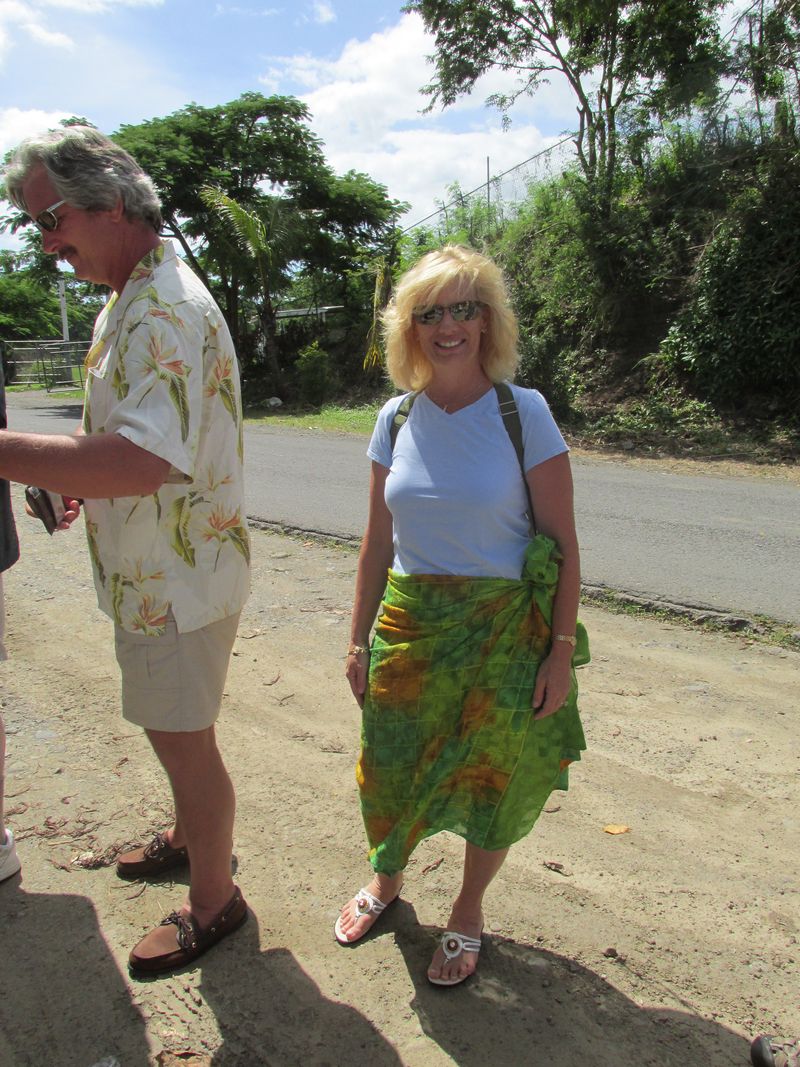 Fiji has a strong tradition of modesty, especially in the rural areas. Karen's walking shorts would not have raised any eyebrows in the U.S., but since they came above her knee, she was given a sarong to put on before we even entered the village of Viseisei. This village is considered the oldest continuous settlement in Fiji, and it was a privilege to be able to tour it. 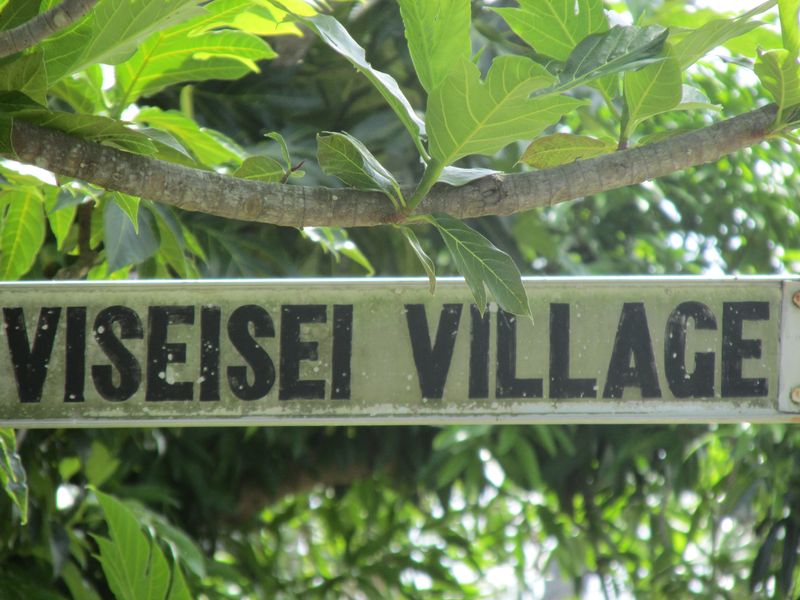 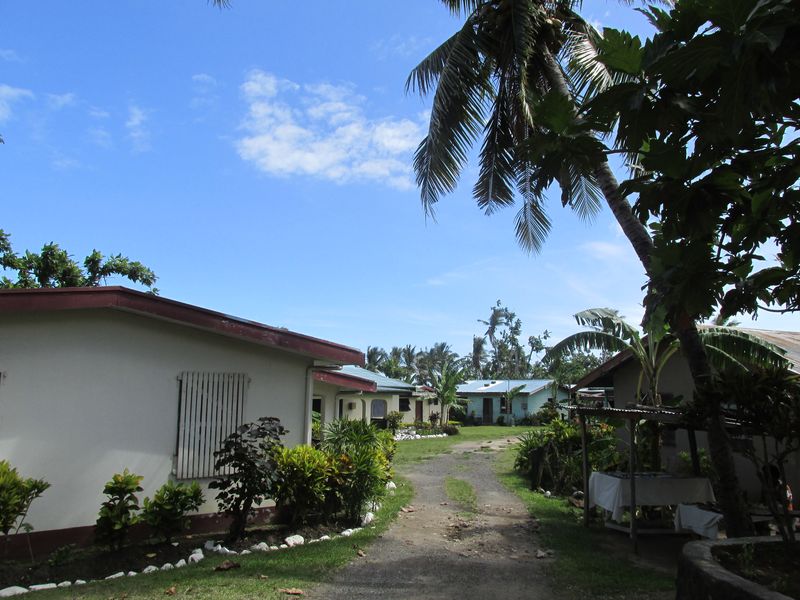 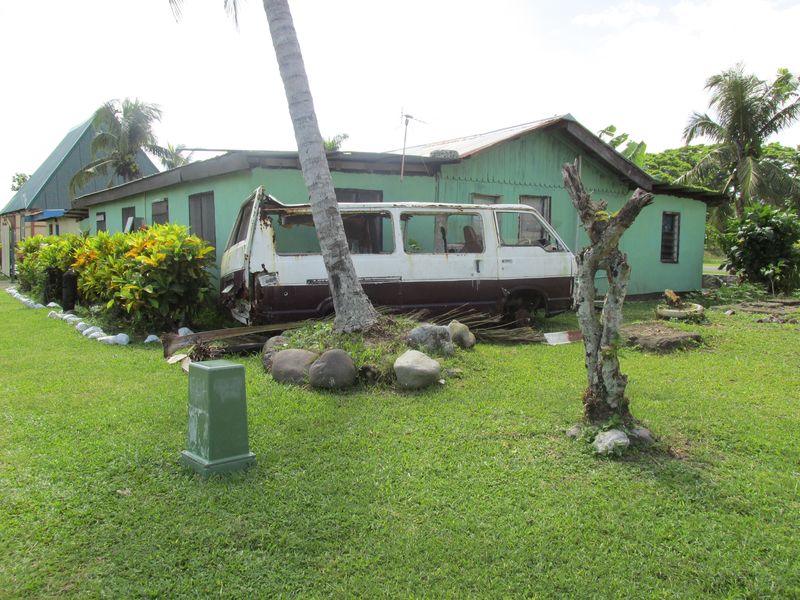 One of the things we found most impressive was the neatness. While the villagers were not wealthy, and there was plenty of weathering on the buildings, each house had cheery curtains in the windows and the lawns and flower beds were well tended and edged with white rocks. It was also very quiet. Our guide told us they don't allow noisy parties or loud music, and there are few vehicles. 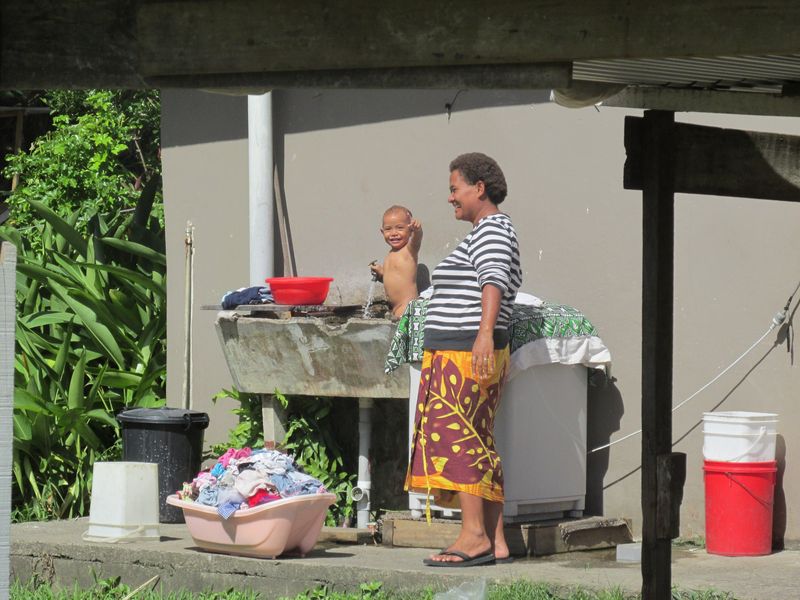 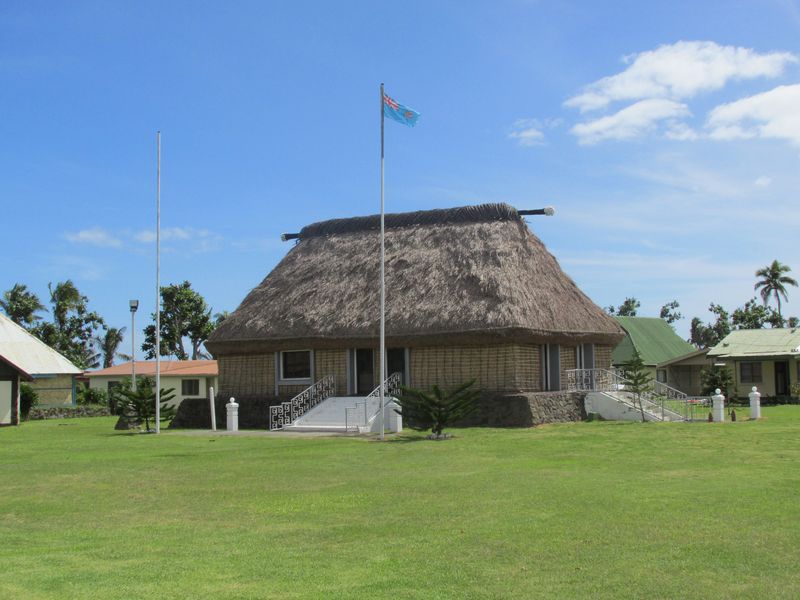 This was the chief's house. You can distinguish the head house from the others in the villages by the addition of white shells on the ridgepole ends. This village also had a viewing platform that had been constructed for Prince Charles' historic visit a few years ago. 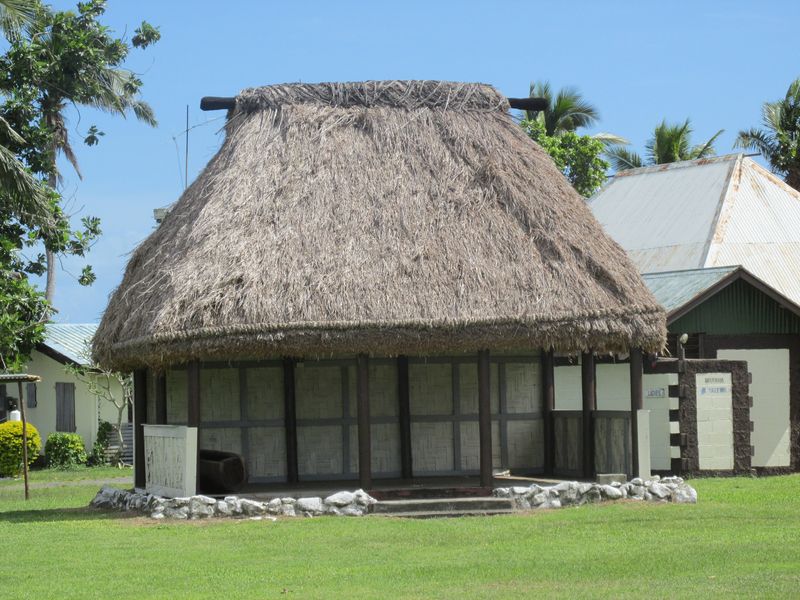 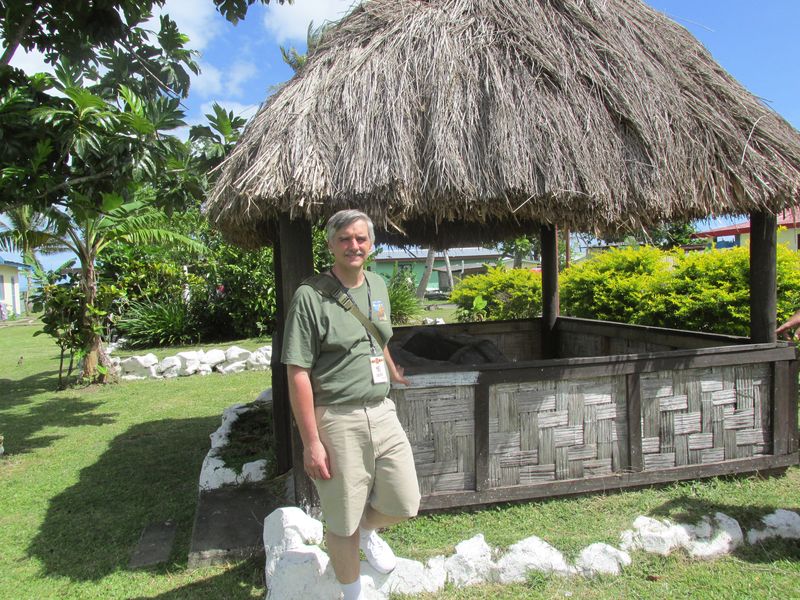 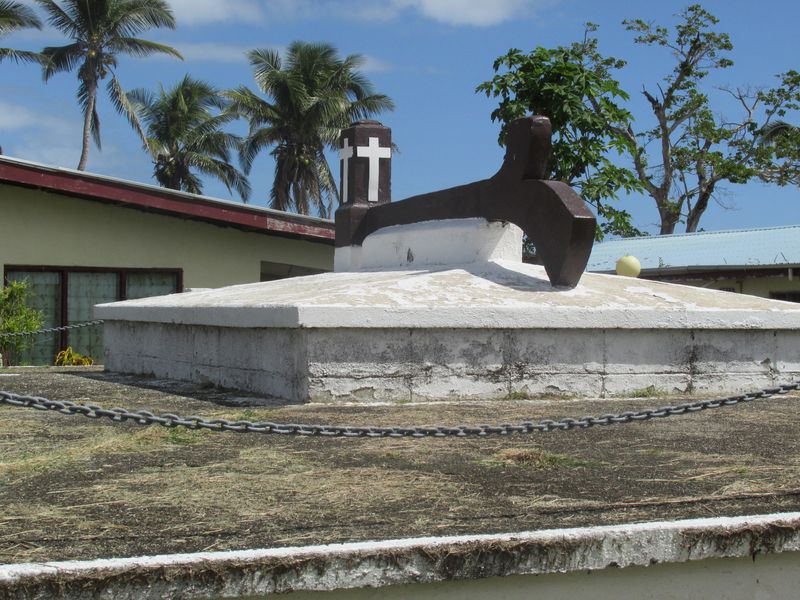 This was such an intriguing monument. The long instrument is a cannibal club, the "v" at the end for hooking your enemy under the chin and breaking his neck. The cross stands atop the club, a tribute to how missionaries helped stamp out cannibalism in Fiji. This is one instance where no one minds the influence of the white man on a native culture : ) Thankfully, the effect of the brave Methodist missionaries from so many years ago is still going strong, evidenced by healthy churches like this one. I literally got chills when we came out the front of this church after having entered and toured it from back to front, and turned and read the name "John Wesley." What a testimony to those brave souls! While reading guidebooks before our trip, I learned that the last person recorded to have been eaten by cannibals in Fiji was a missionary in the late 1800's. I can't imagine the courage to even make the treacherous ocean voyage in those days, let alone confront cannibals so fierce that the slightest mistake or offense could cost you your life. 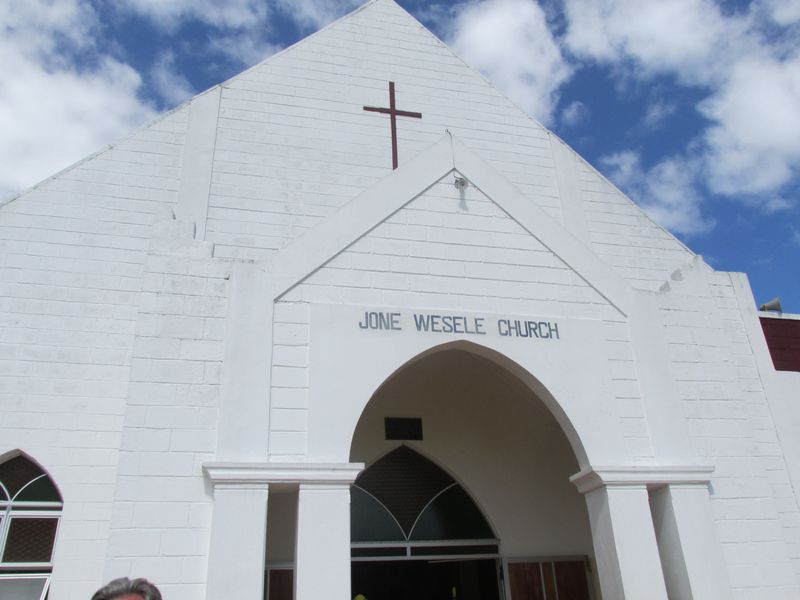 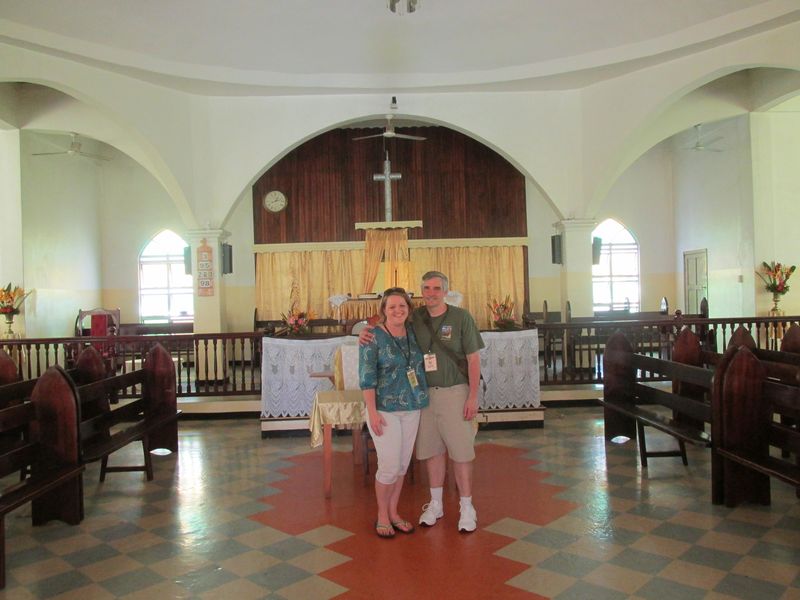 Our guide was a really lively one, and he sat us down in the pews and explained at length about the importance of the church to the community, why they don't have icons there, and how it had been built entirely with volunteer labor and donations by the people of the village. It was so interesting to hear about their musical traditions. The guide then proceeded to sing Amazing Grace in the gorgeous acoustics of the quiet, cool building. He asked if anyone knew "the Titanic song" and we all laughed, thinking he meant "My Heart Will Go On," but he wanted us to sing "Nearer My God to Thee." So Mike and I did.

I'll never forget that interlude. It was such an immense contrast to the Hindu temple we visited later the same afternoon. 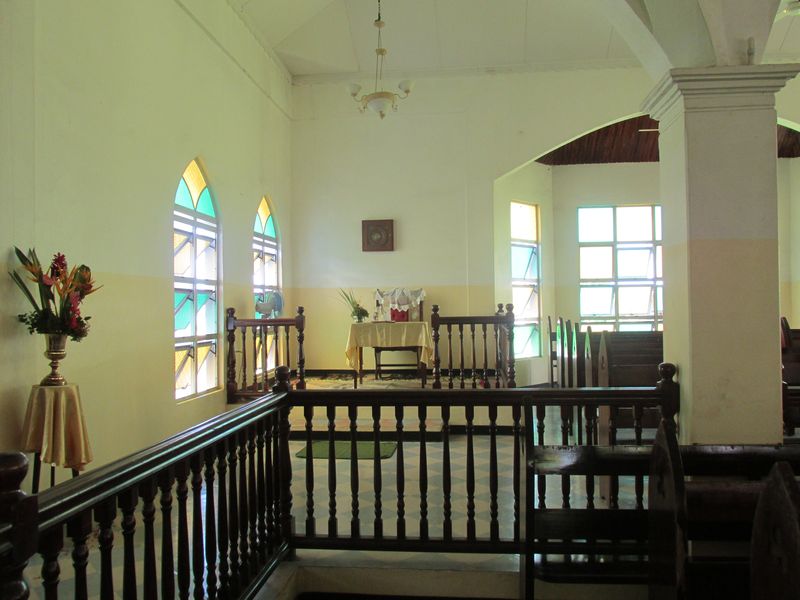 The chief has a special place of honor in the church, too. Back out into the HOT and gorgeous tropical sunshine, we had to stop and compliment the enterprising village ladies on their wares, neatly arranged on tables and covered with cloths until visitors might drop in. You can see another cement monument in the background of this photo. There were many tributes to honored ancestors and tribe leaders, whom they revere but do not worship. 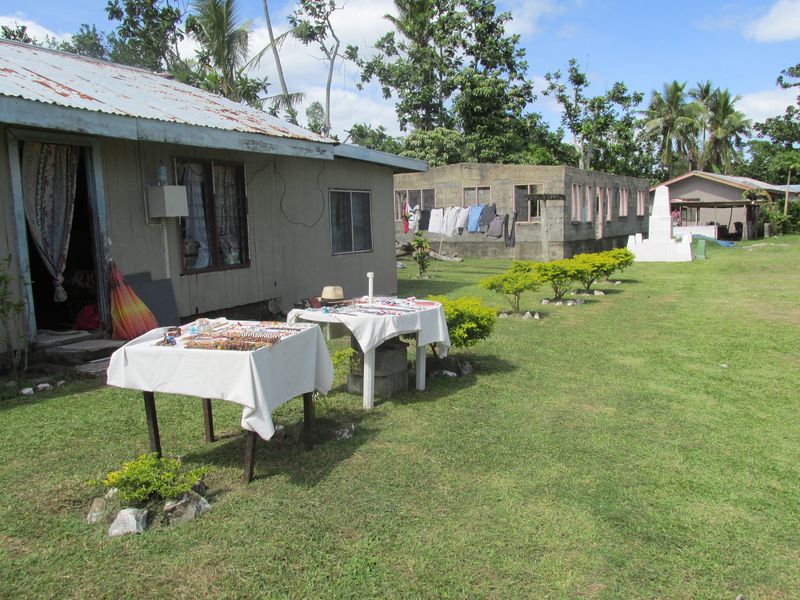 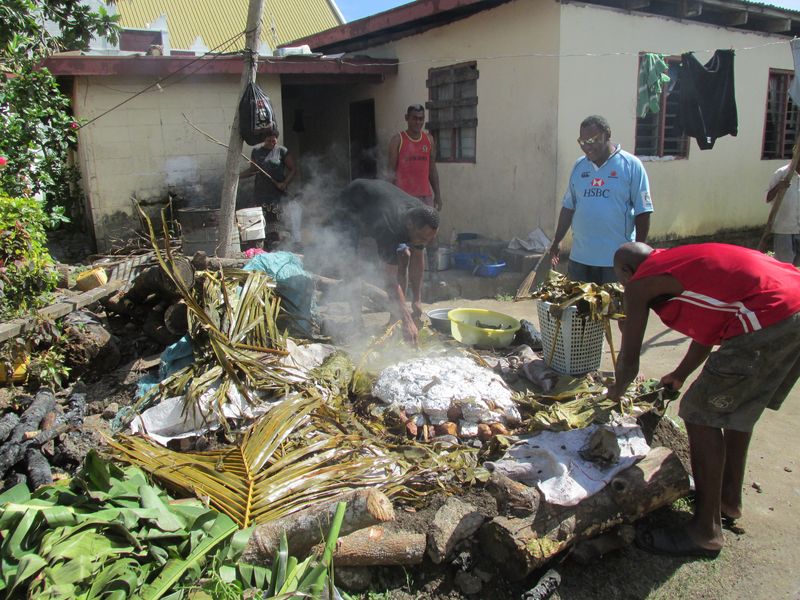 It was fun to see the traditional lovo being unearthed in a village setting, since we had observed it at the resort as one of the cultural activities. Oh my goodness, did it ever smell good! This was quite a large one, because it was to be sold hot to other village families. Kind of like grabbing a rotisserie chicken from the deli! 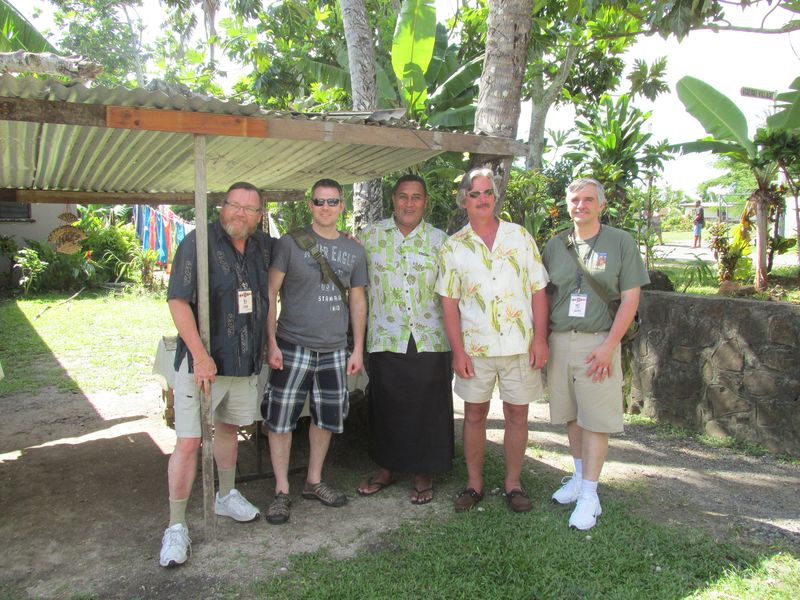 I have lots of other pictures, but this post is long enough already! Almost done sharing our Fiji adventure with you all. I still can hardly believe it happened. I have to keep looking at the pictures to convince myself it wasn't a dream.

Another amazing set of pix and gifted commentary (you ARE a good writer). Don't ever think "TOO MANY PIX" - it is NEVER enough!!

So fun to see these! I make a bit of money taking surveys and at the end of each one is a fun poll question. A few days ago the poll question was, "Have you ever been to Fiji?" It made me laugh given the amazing Fiji photos you have been sharing recently! By the way, only 2% of the people who answered that poll could say they have been to Fiji. Congratulations again on earning it!

Enjoying the pictures and your thoughts on each picture. I will never get to Fiji except through your eyes.