My, but we're having a marvelous time here at the 2013 Stampin' Up Convention! Not much chatter from me tonight as I am MORE than ready to hit the sack, but I couldn't leave you without a few pictures of the utter crazy wonderfulness of attending a rockin' convention with 5700 other demonstrators! I thought we had a light schedule today, but we left the hotel around nine and were gone for 12 hours straight! A highlight of the day was touring the Stampin' Up home office in Riverton, and seeing the beautiful building, shipping department, demo support offices, and idea room. I've been there several times, but it was fun to take my mom and the rest of the team around the place. 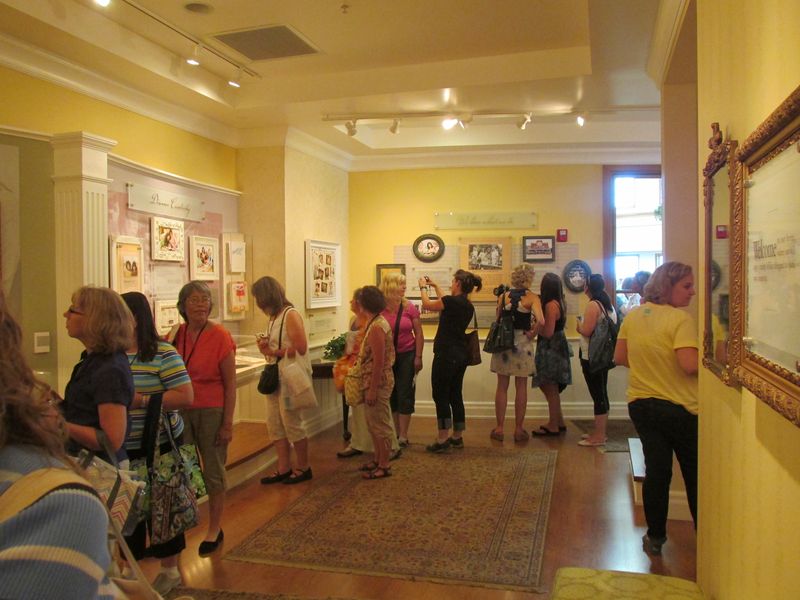 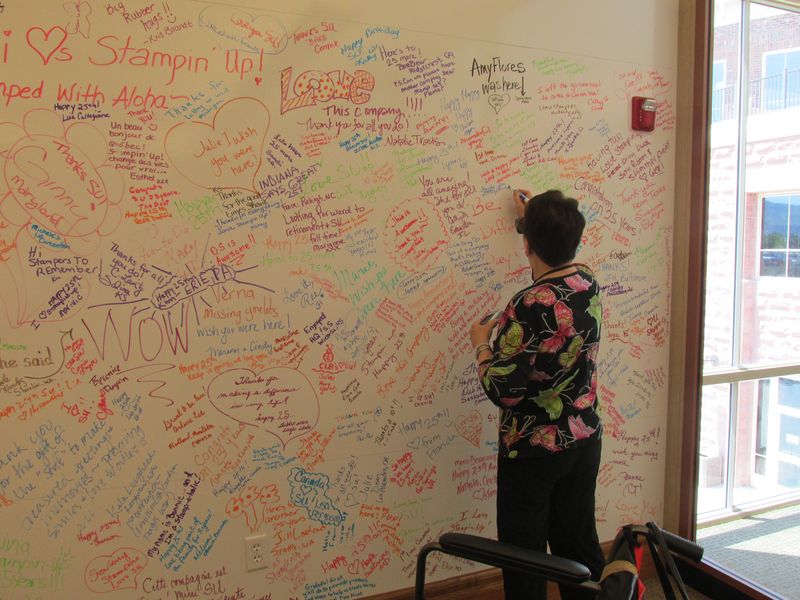 We also got our name badges squared away (mom's had gotten lost in the mail) and picked up our convention shirts. Later in the opening general session we got the most adorable backpacks, which just so happen to be stuffed to the BRIM with stampin' stuff!!! Whoo hooo!!! 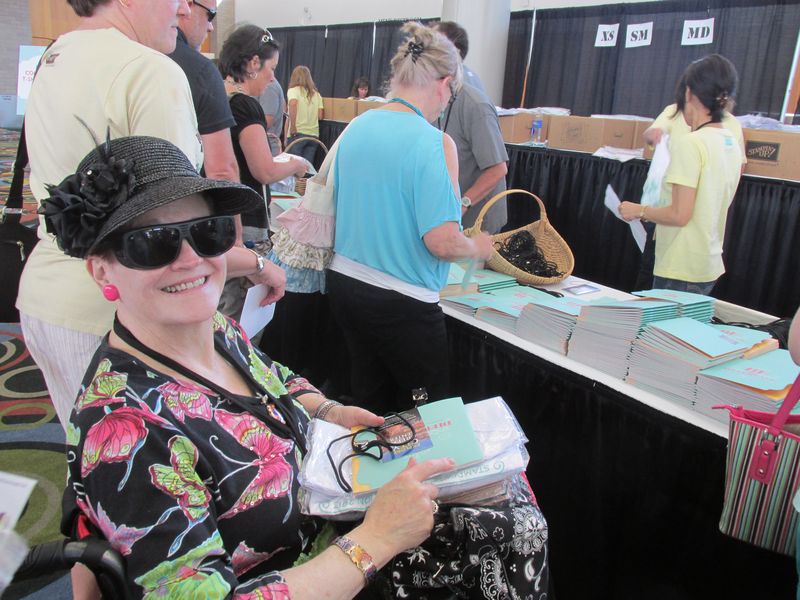 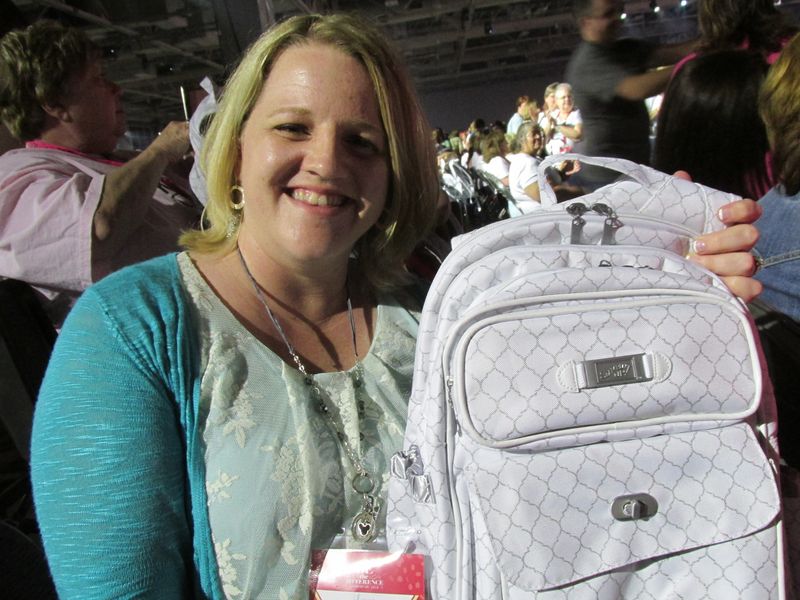 Oooo, shiny!!! Lots of silver bling this year for the 25th anniversary!! we also had a fabulous theme song sung to us (complete with pyrotechnics, which I think might be a first for us!) by someone apparently famous, from the show The Voice. I've never watched it so I didn't recognize him, but he did a great job.Then Shelli's whole family came out on stage to join her, Sterling first, then the girls, then their husbands, and finally all sixteen grandkids. It was very cool to see--and of course we gave them a standing o! 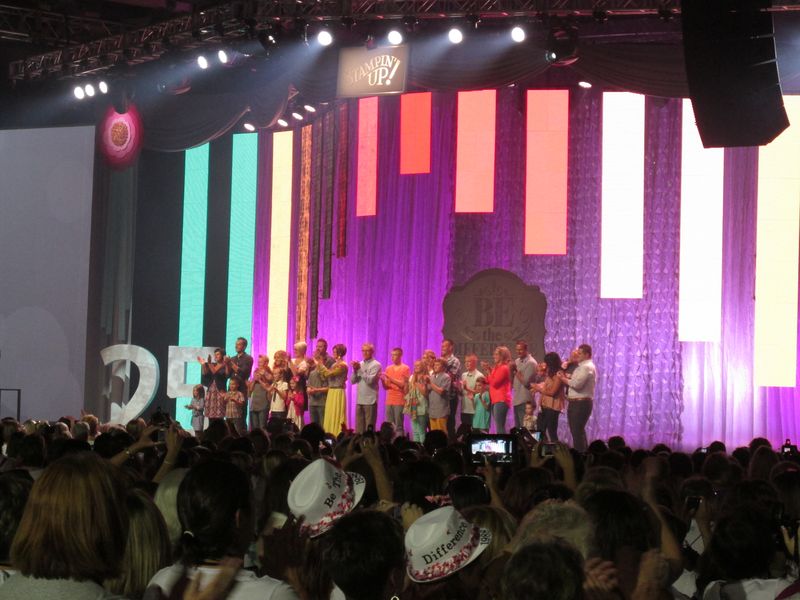 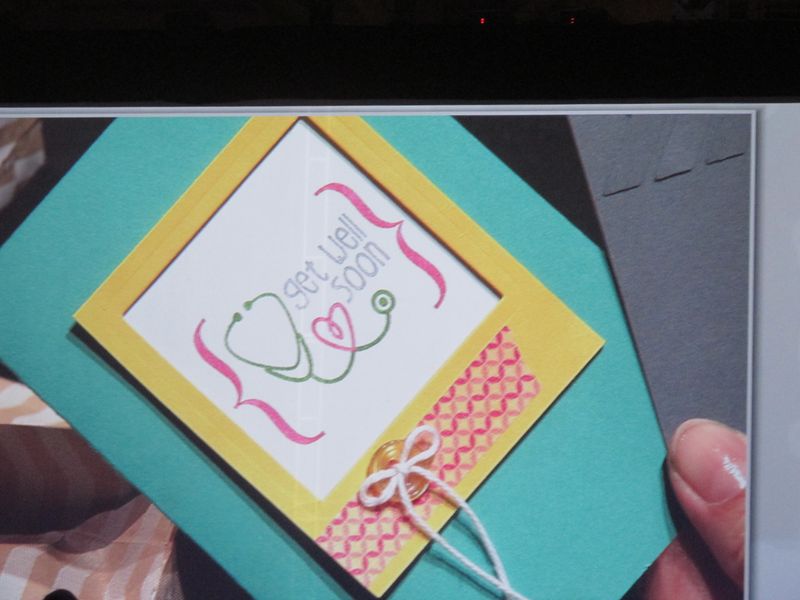 Of course there was fabulous stamping by one of my personal faves, VP Pam Morgan, and back-to-back prize patrols in addition to an all attendee giveaway, a free stamp set from the Holiday Catalog! Two of our SOMH team won one of the prize packages, so we were feeling like Convention 2013 is off to a very auspicious start! I forgot to tell my team about a surprise I have for them tomorrow... stay tuned for more news tomorrow night, and in the meantime, be sure to follow me on Instagram (pudgiesmom) and Facebook (Song of My Heart) for quick updates and casual snaps that will give you a little flavor of the excitement we're experiencing here in Salt Lake.

Your Mom is just lovely! She looks so stylish! The perfect Mom for an Executive! :)