An eventful Thanksgiving - Song of My Heart Stampers 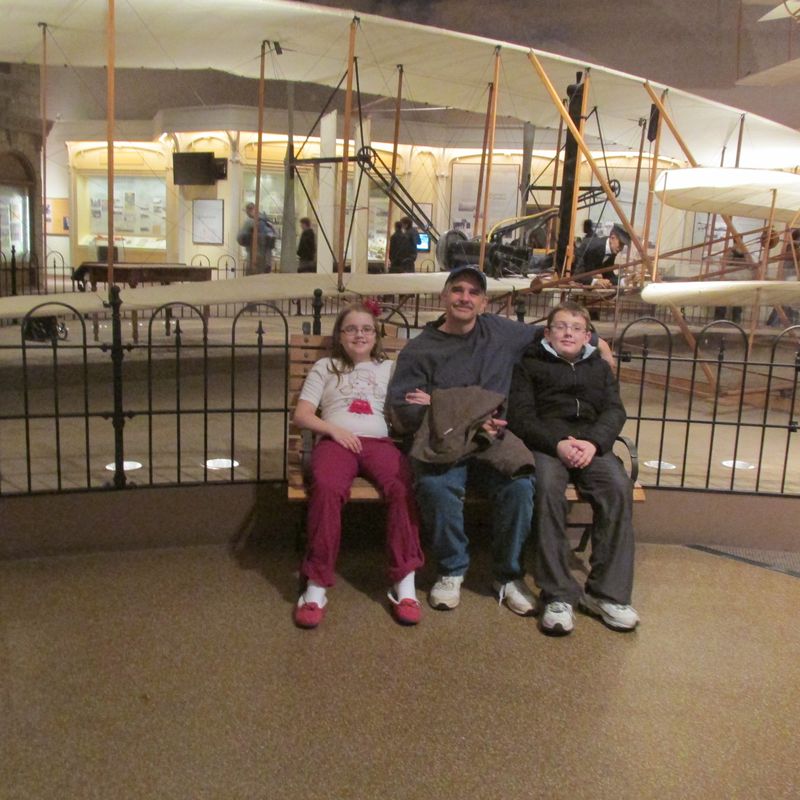 We had a very non-traditional Thanksgiving this year, having decided three weeks ago to spend some bonus money on a family trip to the nation's capitol. I'd love to say it was a fabulous trip--but it was a little too eventful! After a rough start, however, we finished up in fine style, and managed to see just about everything we had prioritized on our lists. The kids were nervous about the subway at first, but we were all old pros at the Metro by the time we left!

We got in early enough on Saturday that we spent a couple of hours at the Air and Space museum right away. It was extremely cold our whole trip there, and when it finally warmed a little, it rained... and rained... and then it freezing rained... we were thankful our hotel at L'Efant Plaza was close to the mall, but we still ended up paying a lot in transportation because it was simply too cold to be out. As you can see from these photos, our winter coats never came off the whole time. 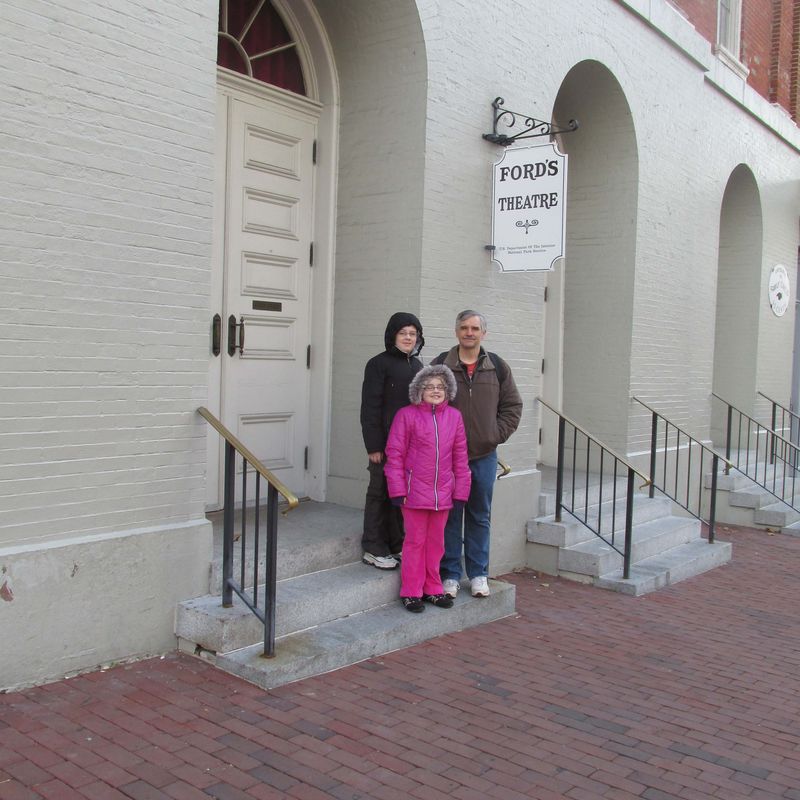 The next day we went to Ford's Theater and the Peterson House for a sobering tour of the events around Lincoln's assasination. Then we had a little bad luck of our own. Sometime since our arrival in DC, our credit card number had been stolen! Thankfully, our company spotted the unusual activity right away and canceled it. Frustrating, but a relatively minor inconvenience, over all... 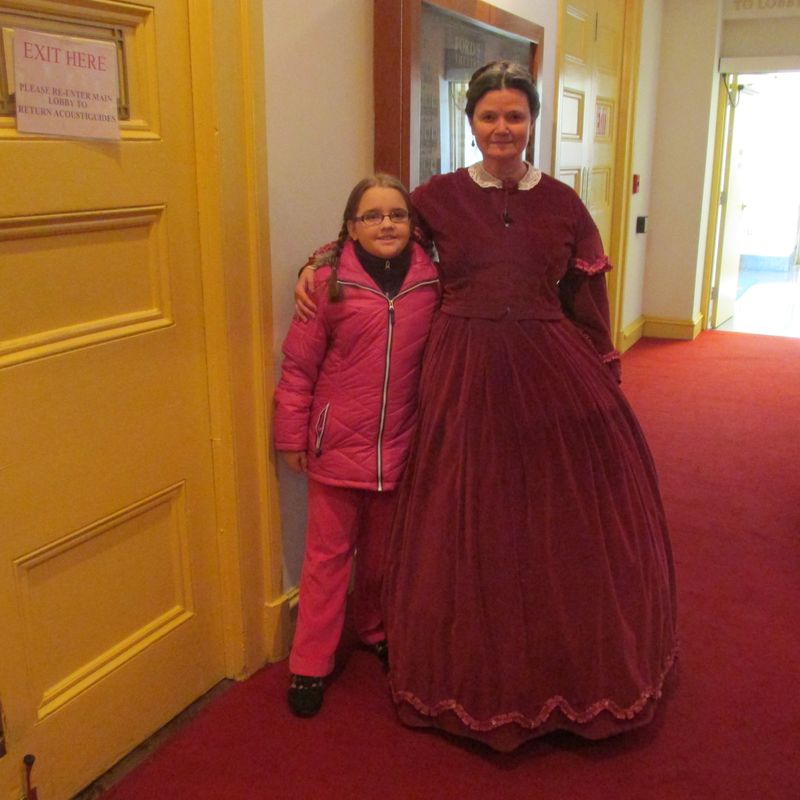 That afternoon we toured the Spy Museum, which was really cool. I didn't get any pictures, however, because I was steadily feeling worse and worse and we had to leave by four p.m. I thought I was just exhausted, but the bad sore throat that soon popped up removed all doubt. I went to bed that night fully clothed WITH my winter coat on because of the chills, and the next day I dragged myself to an Urgent Care while Mike took the kids on the hop-on, hop-off bus tour. They definitely had the better end of that deal. I had a 102-degree fever and couldn't swallow at all by that point! Thank God for antibiotics!

The kids and Mike had a great time and saw all kinds of things. They even got all the way out to Arlington and managed to time it just right to see the changing of the guard. They also saw a horse-drawn military cassion in a funeral procession, and some other special things commemorating the anniversary of Kennedy's funeral. 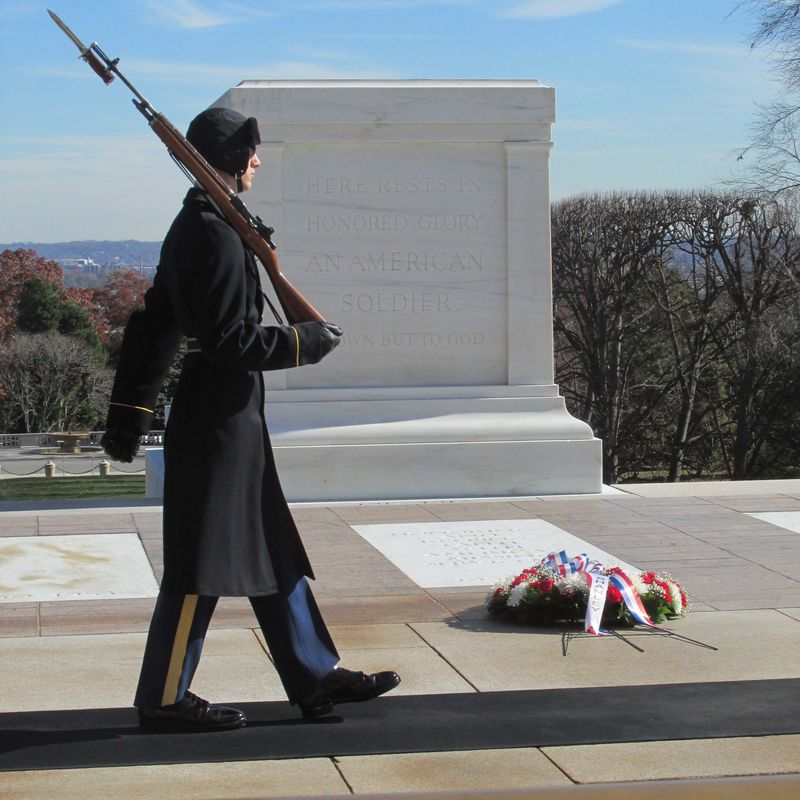 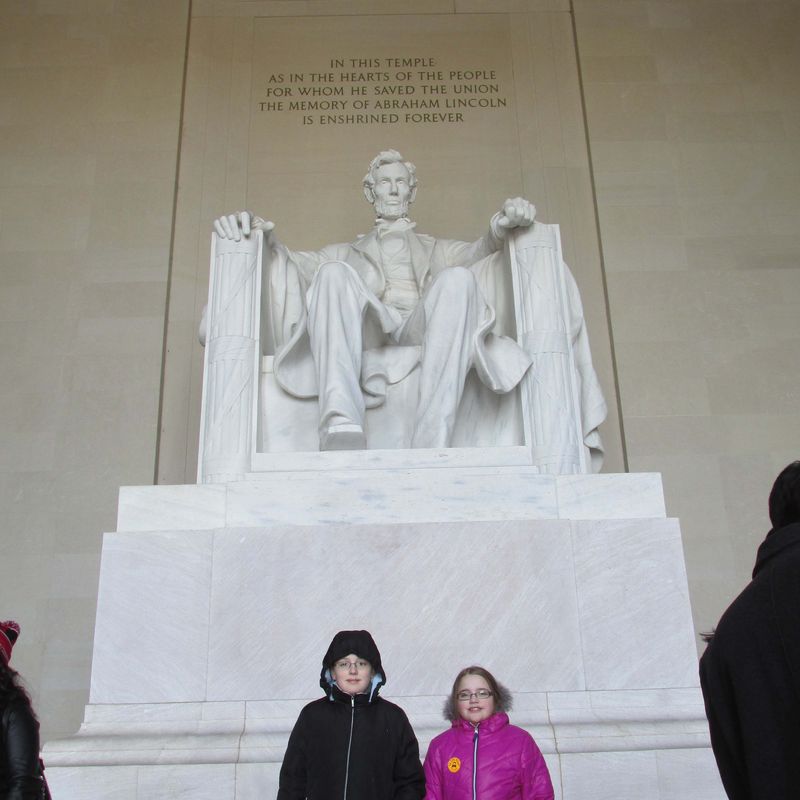 Since I'd been to Washington as a child, I was disappointed not to get to see the newer monuments in person, but at least the kids did. A favorite was the new World War II memorial. It is just gorgeous. 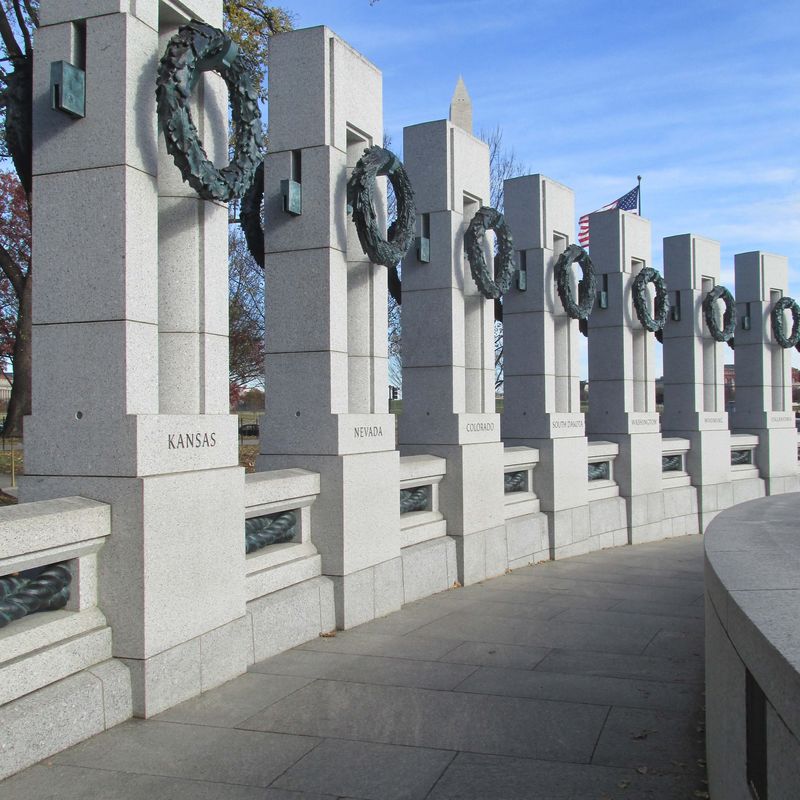 This was not a good trip for photos. It was too cold and rainy to even think about it when we were outside, and the lighting inside the museums is purposefully kept very low (often we could not even read the placards, it was that dim). In places like the National Archives (where we saw the Declaration of Independence, Constitution and Bill of Rights--and sadly NOT the Magna Carta, thanks to a delay in the new exhibit caused by the recent government furlough debacle) pictures are not allowed at all. 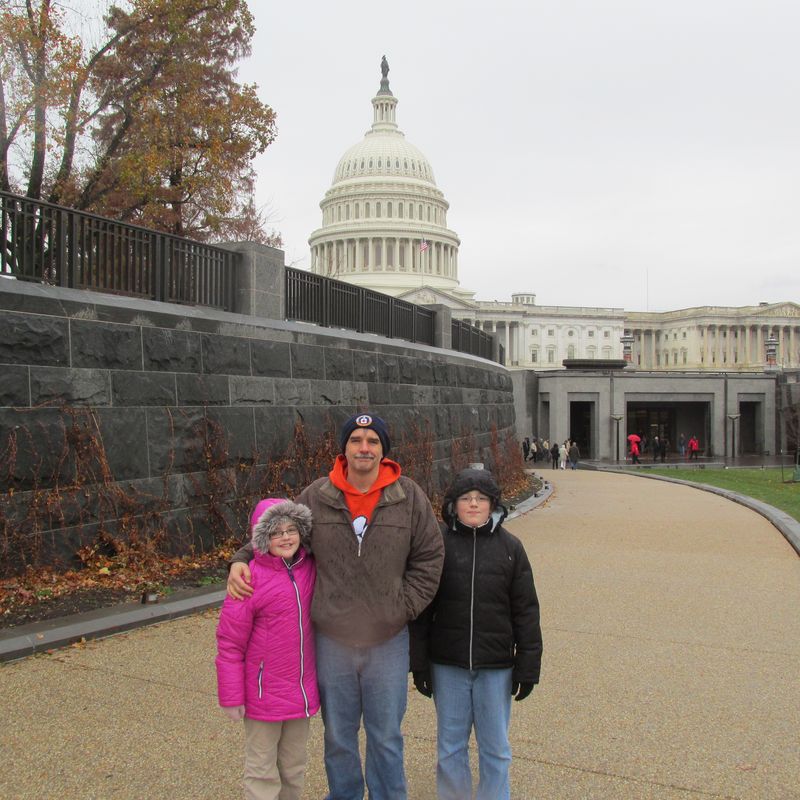 One of the days we didn't have a camera along the whole time because we were going on the White House tour in the afternoon and you can't bring ANYTHING with you. I took that a little too literally and forgot to bring my ID along. So, in another stroke of stunningly bad luck on our trip, I wound up waiting in the rain (still quite sick at this point) while my family toured the White House without me. Not my finest hour.

But! We did see the original Star-Spangled Banner (I bawled), Dorothy's red shoes, the First Ladies' gown exhibit, the Wright Brothers' flyer, the Jonesboro lunch counter, the Hope Diamond, and many, many MANY other absolutely mind-blowing things. It was really hard to be peeved at the weather and our bad luck when you're privileged to be in the same room with Lewis and Clark's compass, or George Washington's dress uniform, or the Spirit of St. Louis. I hope my kids never, ever forget this trip! 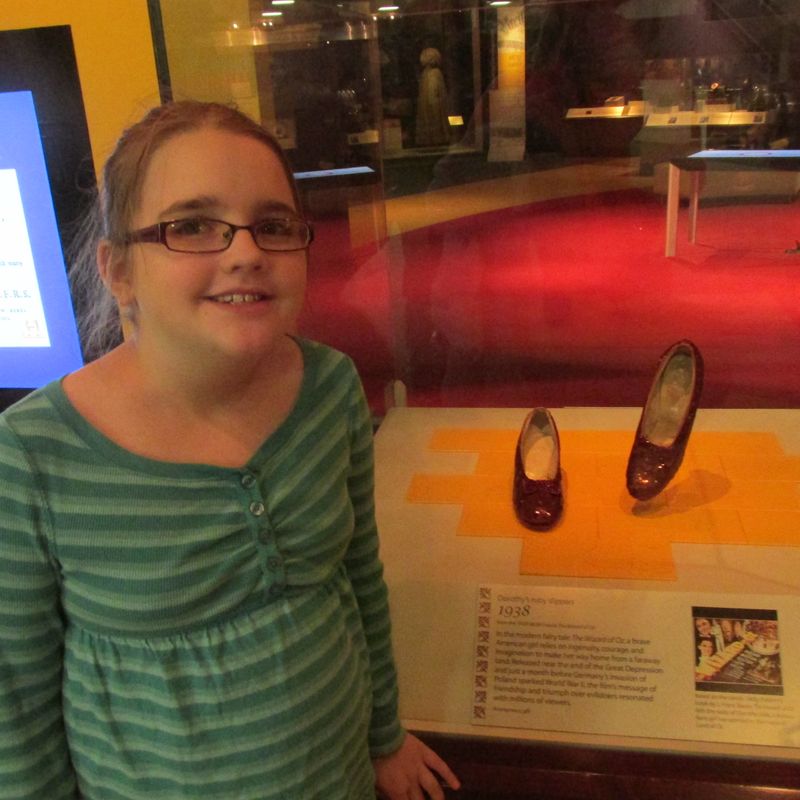 And because we weren't having an exciting enough of a trip already, then our hotel had a fire alarm. I think I actually stomped my foot at that point. It was getting to the point where we were just waiting to see what would happen next! Thankfully, that seemed to be the end of our streak of bad luck.

Eventually I was feeling almost back to normal, and we finished up our trip with a fabulous Capitol tour, and two good solid days of Smithsonian Museums. I loved the Castle and the gardens. We sure soaked in the astounding architecture on this trip! The Library of Congress just blew our minds! 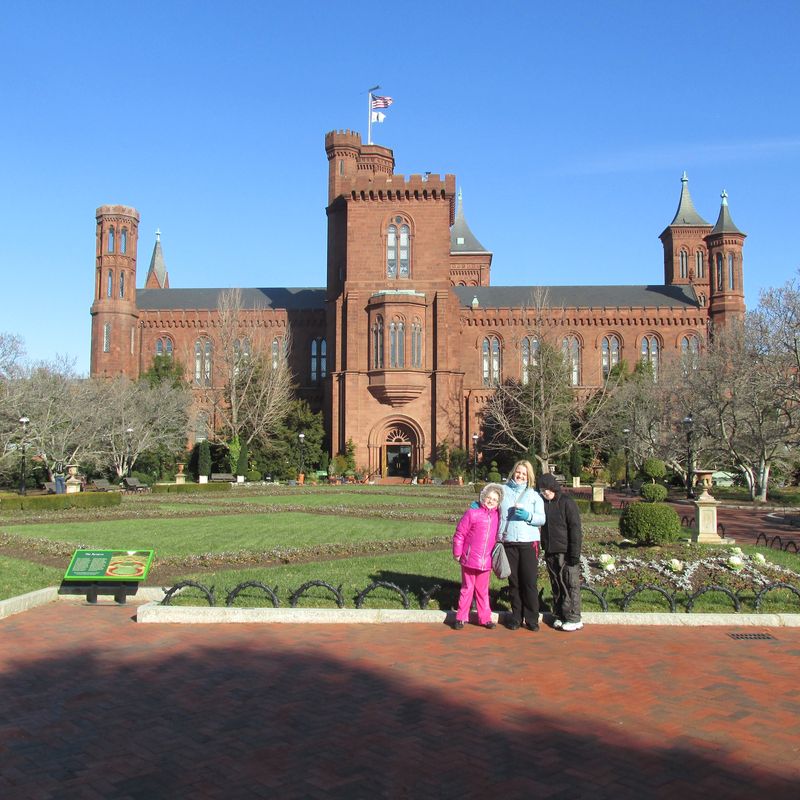 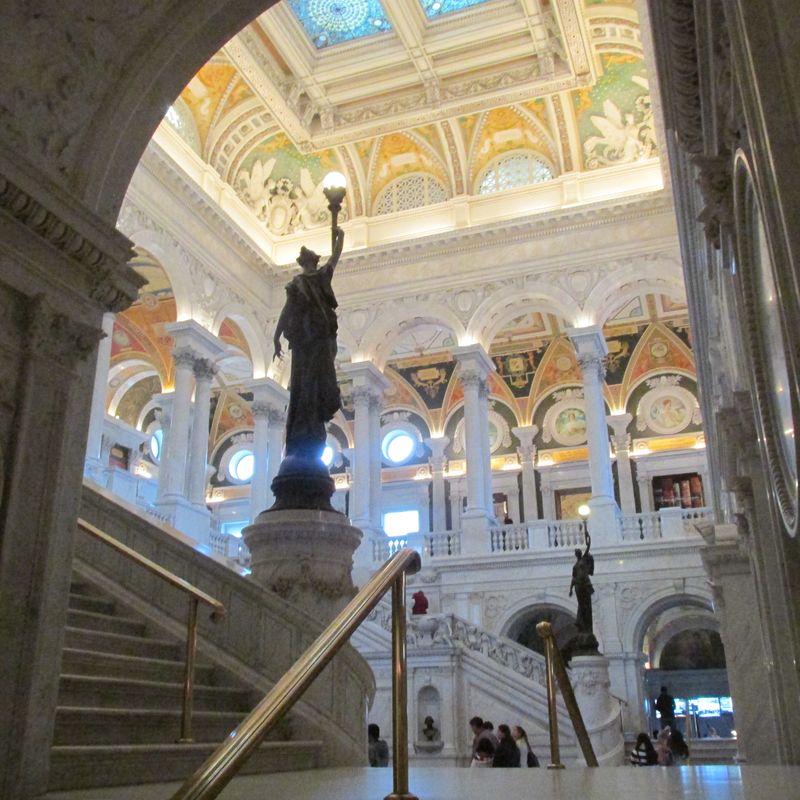 I think the kids would have been content to stay in the Library the whole trip (me too; the Civil War exhibit there was incomparable). I snapped photos of a bunch of book covers that caught their eye, so we can request there for our library here. And to think we had not had that stop on our list of must-sees! We only went there because the weather was so bad that day and there was a tunnel from the Capitol. 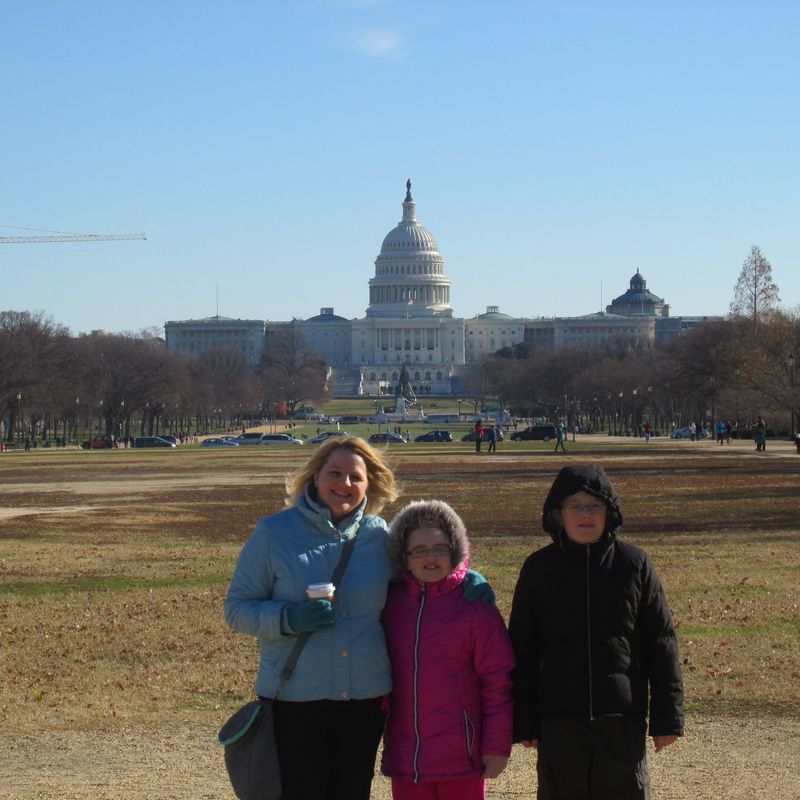 I think I'd better stop there--I can see your eyes glazing over! I hope you all had a wonderful Thanksgiving and were able to celebrate the season of gratitude with family and friends around a table, whether you had Maryland crab cakes for your holiday feast, like I did, or something more traditional. We'll never forget our out-of-the-ordinary 2013 Thanksgiving. Several times during the week we'd be laughing about something silly and I'd be seized with a sudden, fierce gratitude for this precious, precious life I've been given. Breathless with unshed tears. How blessed I am. Our joys may be simple, our "splurges" little ones, our home small; but our hearts brim with love and silliness and we delight in each others' company. There's something to that.

And for that, and for the warmth of your friendship, I am so thankful this season.

Wonderful, Lyssa! So glad you were able to come home with great memories despite the 'issues'.

See? I told you to see the Library of Congress! The stumbling blocks on your trip did NOT ruin the trip for you and I'm so glad. Those kids are going to have an insider's bit of info at quite a few points in their education years. THAT's cool. I'm glad you are getting better too.

Sounds like a trip to never be forgotten, for the good and the bad! Glad you are feeling better friend!

I'm so glad you documented both the good and the bad. It will make it all the better when you've forgotten some of those details…and you look back and say, "Wait! I forgot it was THAT bad!" (Although I don't think you'll ever forget your ID again…that one was rough to read about…you outside the White House, sick, in the cold…it's like kicking someone when they are already down…just not even kind of funny).

What fun. Made me want to go back. My son lives in Springfield near the end of the metro. We had such fun traveling on the metro and visitng all of the sites.

thanks for sharing Lyssa...you made me cry a little even, we are also blessed beyond measure and I am feeling grateful!

Loved every bit of your story. So sorry you were ill during the adventure. Hope your Christmas holidays balance all of that out for you.