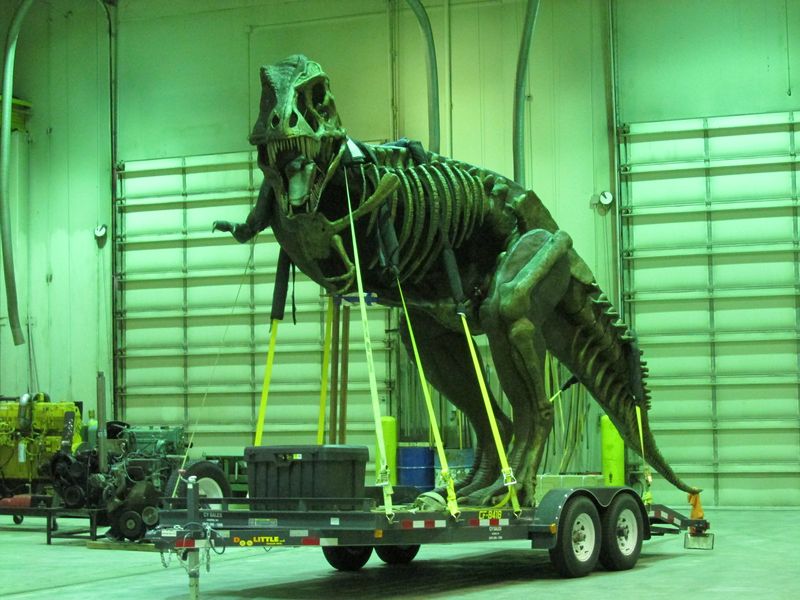 How'd you like to meet this guy in a darkened warehouse?? I did, thanks to a private tour arranged by family friends on our trip to Wyoming last week. A private benefactor commissioned this astounding one-of-a-kind, 4,000-lb bronze sculpture for the college, to celebrate the discovery of the first T-Rex skeleton found in Wyoming that will be staying in Wyoming. We were so lucky to get to see it, because it has not been installed yet and the dedication isn't until the end of August. 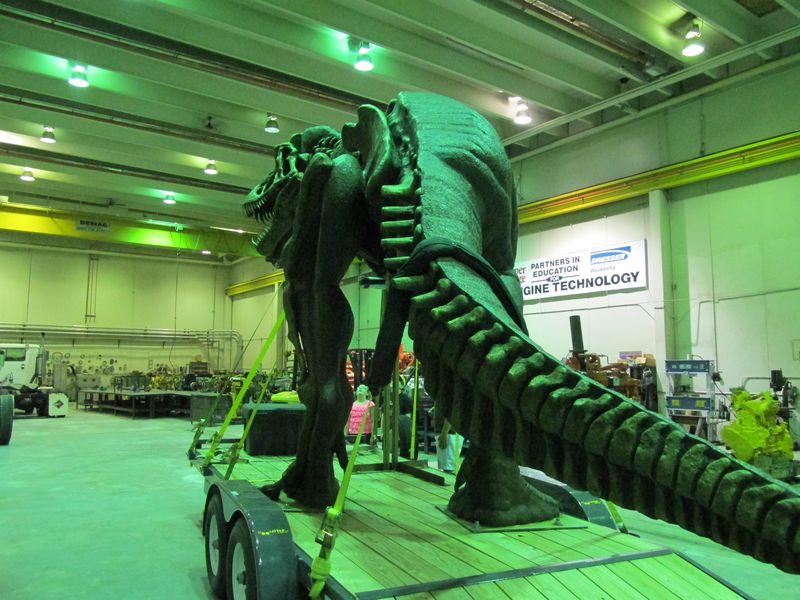 What makes this massive sculpture unique is two things: first, it is sliced down the middle so that half of the skeleton is exposed and the other half is fully muscled and fleshed out. It's really one of the most amazing things I have ever seen. You had a complete picture of how the bones worked to form the body. The two very familiar images of the T-Rex as we know it came together in perfect harmony in the hands of talented sculptor Chris Navarro. 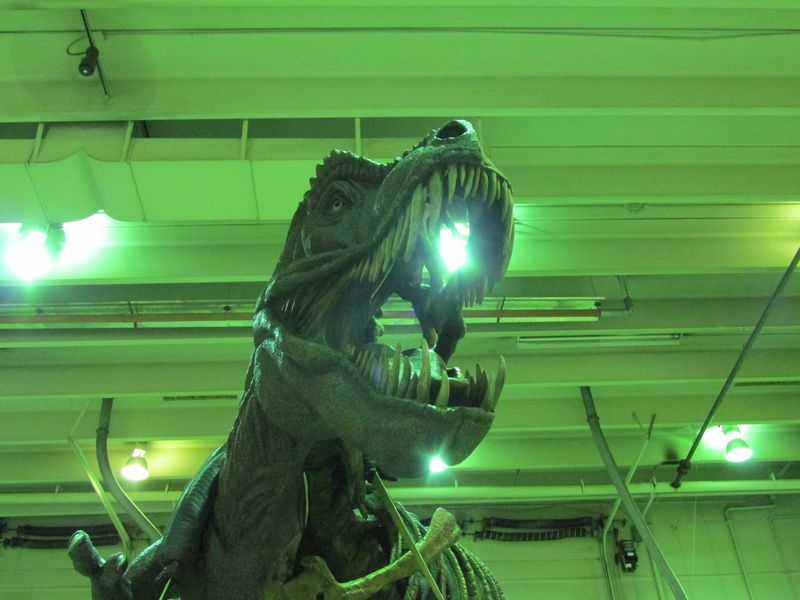 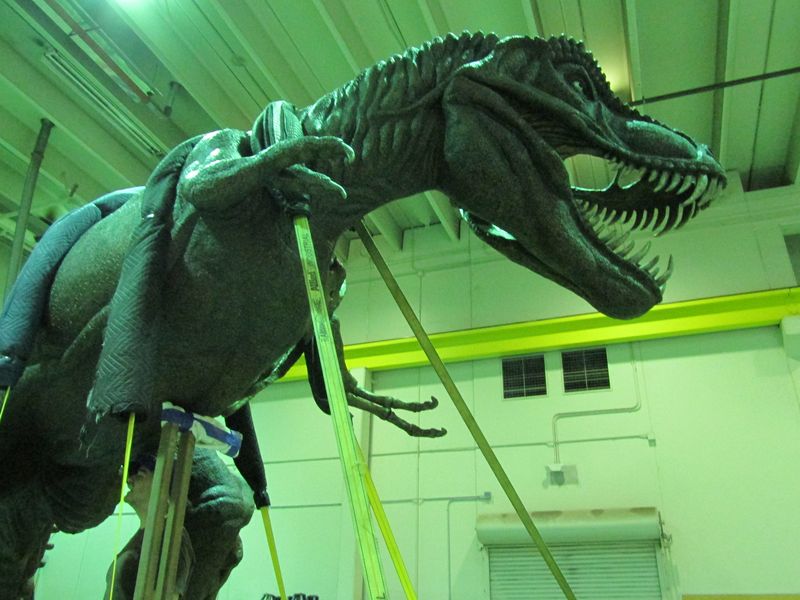 So interesting! But no matter which side you looked at, the ferocity of the creature came through. The other thing that makes this sculpture unique is that when it is finally in place, it will be lit from within by a string of LED lighting starting in the skull and ending at the tail. So when viewed from the skeletal side at night, it will be mind-blowingly dramatic, and viewed from the felshed-out side, it will glow all around the outline. How eerie--can't wait to visit the campus next summer and view the statue in it's final resting place. It was cool enough just on a trailer in the warehouse! You can read more about the sculptor, the process used to create this bronze, and the amazing (and amusing) journey of the T-Rex thus far by clicking here. 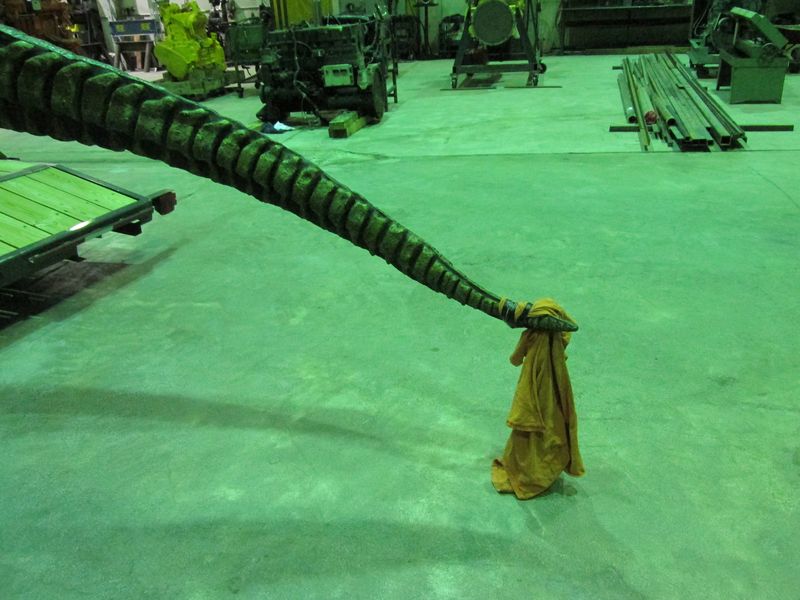 As if that wasn't cool enough, as we were leaving, we were asked if we'd like to see the ACTUAL T-Rex, who was under high security in the same building! So we got to go visit something few people will ever get to do in their lifetimes--an actual lab where "Lee-Rex," as he is nicknamed, is being removed from the concretion (look at me, tossing around archeological terms like I know what I'm talking about) and speak with the paleontologists responsible for freeing him from the rock. They were so enthusiastic and they really spent a lot of time with us, which was so nice of them. 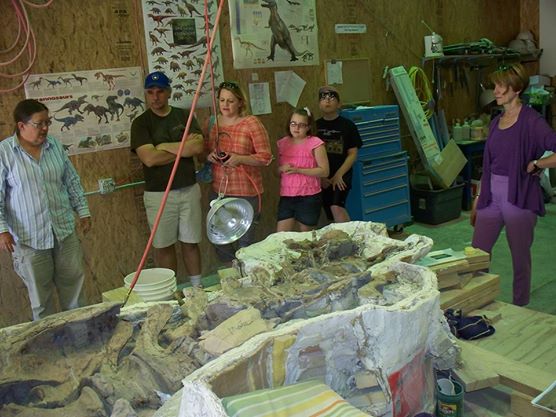 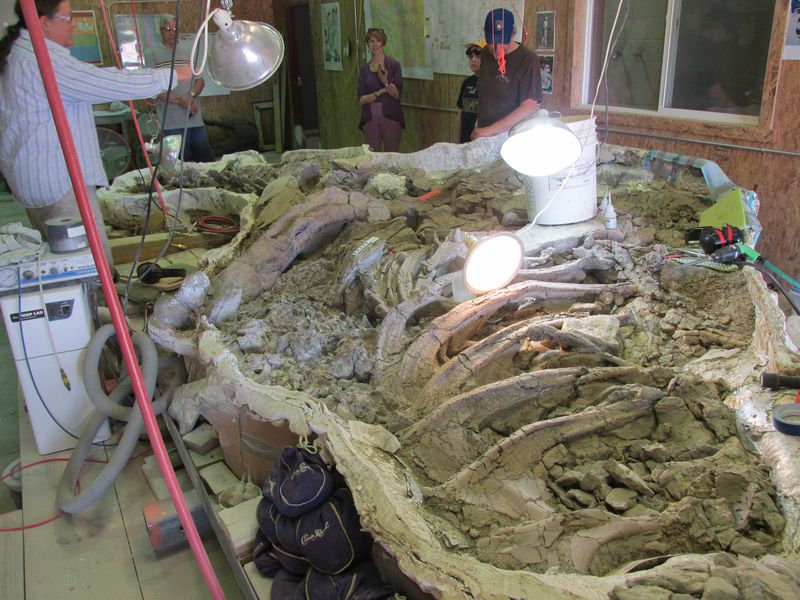 We learned all about the reason the bones were in the positions we saw them today, and were even clued in on a ancient mystery--there's a hole in the dinosaur's femur and no one is quite sure how it got there, though each of the scientists has their pet theory.

It was amazing to me to find out the whole process takes so long... they have been working just on this one step for two years now. Very cool to see the pictures and hear about how Lee-Rex was discovered from just this knobby-looking thing on the ground--I'd have never known that was not just a rock! And the careful packing and transportation they went through to bring the dinosaur to the campus. 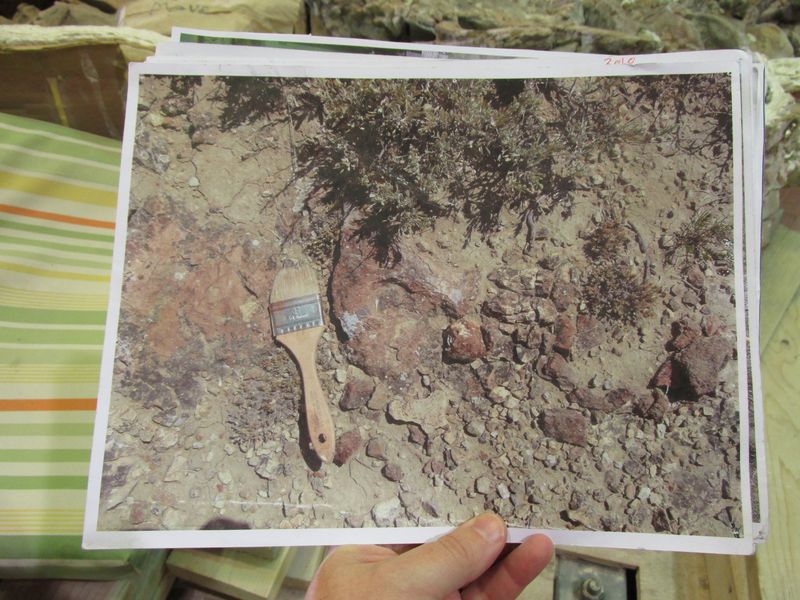 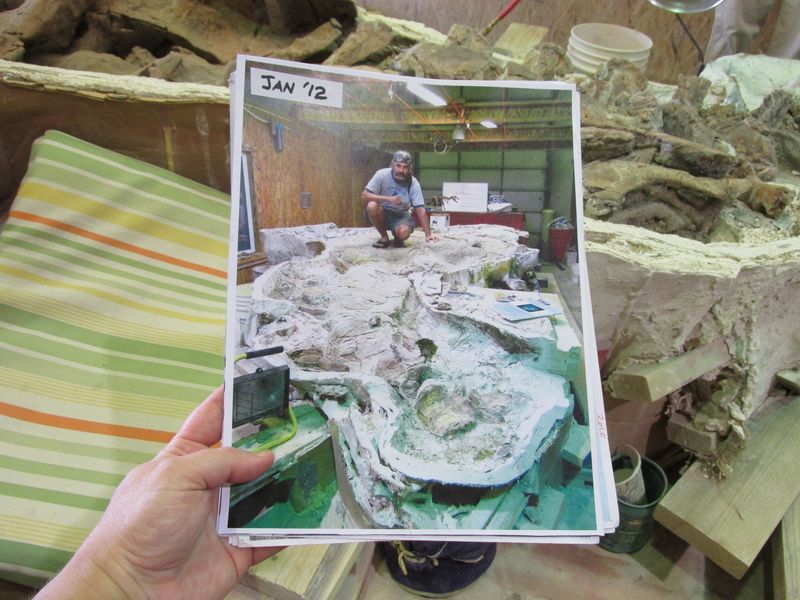 It was all totally fascinating (albeit dusty), and I know none of us will ever forget it. I had tears in my eyes as I thanked our friend, thinking of what a cool science lesson my children had been blessed with that day! God is so cool.

So... nothing to do with papercrafting, just wanted to share! Hope you're enjoying our family vacation photos. The NEXT trip I take out West is to Utah for the Stampin' Up convention, in just two weeks! Whoo hoooo!!!

That is SO cool! I would've loved to have seen it myself. I'm also impressed that they let you take pictures and post on-line since it seems pretty secretive at this point! Thanks so much for sharing the photos and your experience!

Wow! That's incredible! Thanks for sharing it with all of us!