« In love with these lacy, pink and vanilla notecards! | Main | from simple to stepped-up: Scripture notecards » 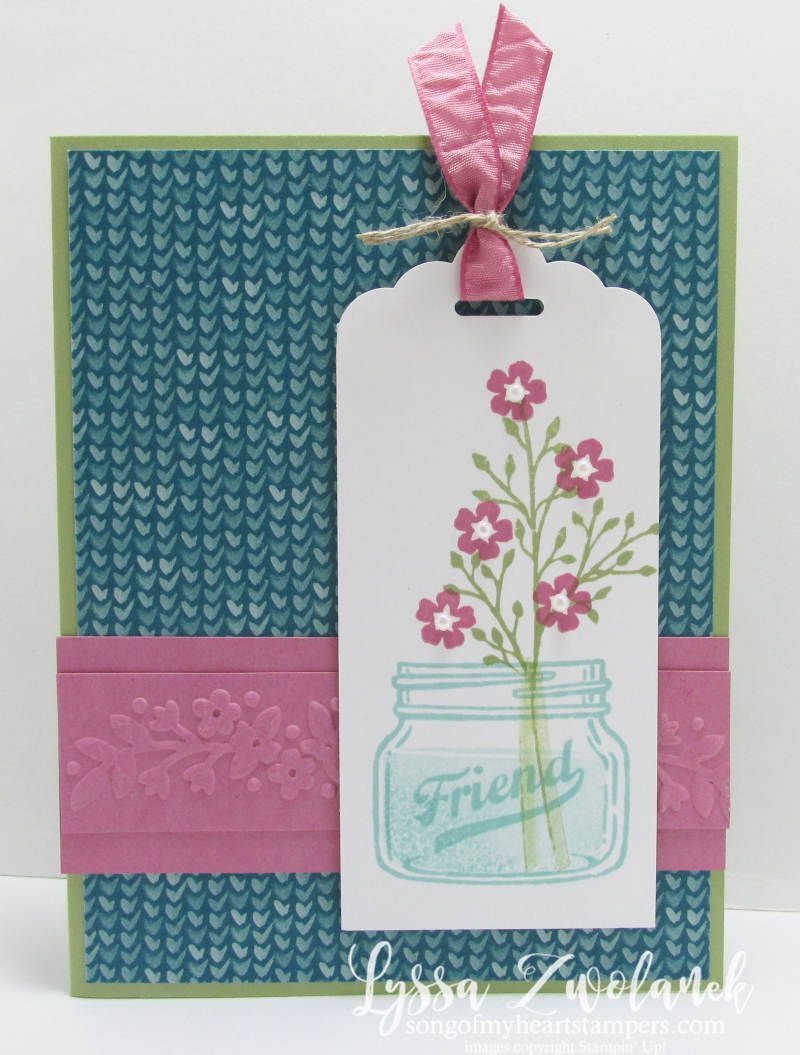 Mason jars (or Ball jars) are SO hot right now, and it's easy to see the appeal. These humble glass canning jars are so versatile and trendy, but they also remind of us simpler times and the innate beauty of useful things.

I have quite a collection of differently-sized jars that I use for showers and events, as well as around my home, so I was super excited to get my first glimpse of the new 2016-17 Idea Book & Catalog and there were Mason jar stamps right on the cover!! First thing I flipped to was page 75 to see the Jar of Love stamp set. It has coordinating Framelits for the Big Shot, too, but for these cards I just played with the set itself to see if I really HAD to have the bundled Framelits or not. I think it stands alone quite nicely! 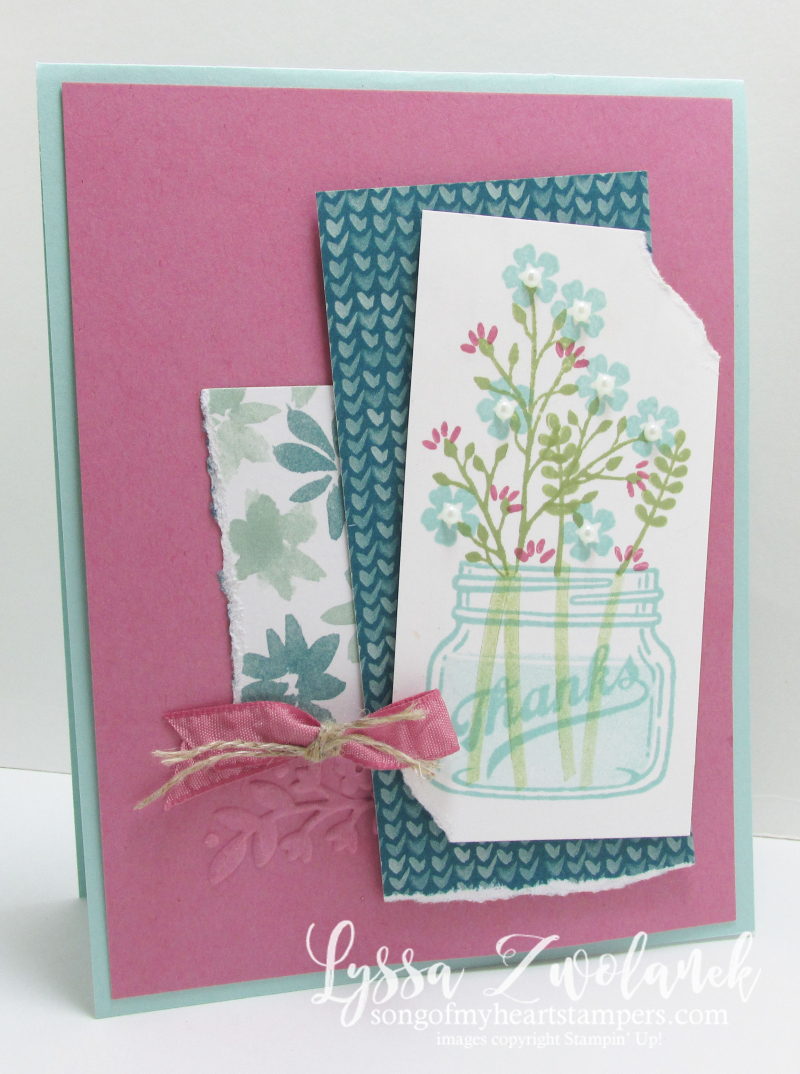 I started with Pool Party since I knew I wanted the jars to be pale blue (Soft Sky would have worked as well). I love the new In Color Sweet Sugarplum, so I added that, with Pear Pizzazz for light green stems, and then a patterned paper from the new 12x12 pack Blooms & Bliss Designer Series Paper that had Pool Party and Island Indigo in it. I looooove Stampin' Up's color coordination--their most basic and best feature--all the inks match their cardstock and ribbons and markers exactly. That pleases my little color-lovin' heart to no end! I am a matchy-matchy girl all the way. I don't ALWAYS change my purse to match my outfit before I leave the house, but if it clashes with my outfit, I sure do. : ) 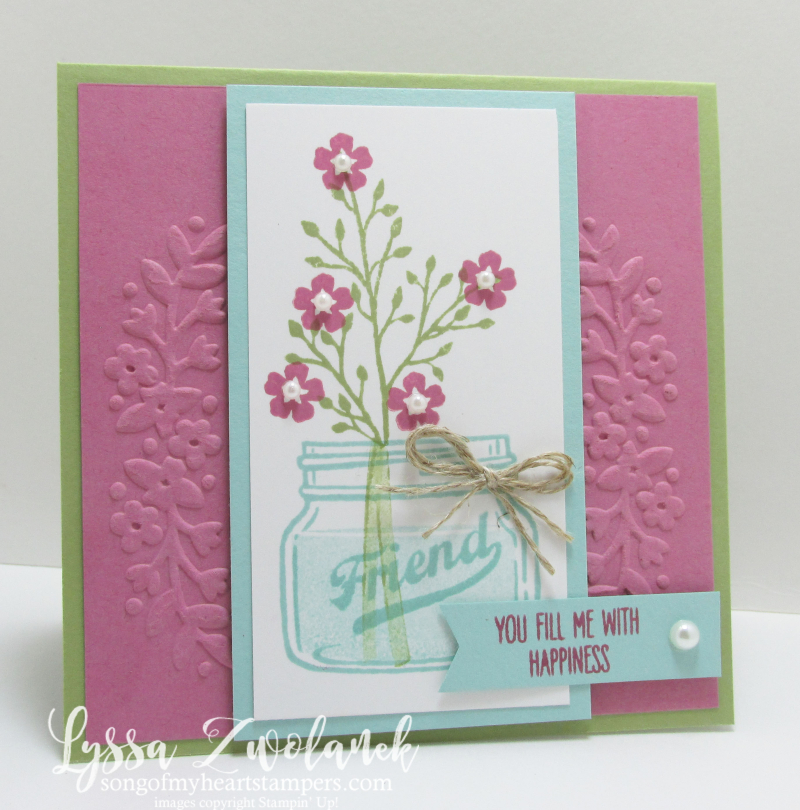 Each of the four cards I made during this crafty session used the new Floral Affection duet mini embossing folders (2 pack, item #141713). I love how embossing folders can easily add some interest in a subtle, tone-on-tone way. Mini folders allow you to position the design right where you want it to be, too!

I also used the Scalloped Tag Topper Punch, Sweet Sugarplum ruched ribbon, Linen Thread, and lots and lots of Basic Pearls. I have been on SUCH a pearl kick lately. I just ordered four more packs! Now watch, I won't use any for months now. : ) 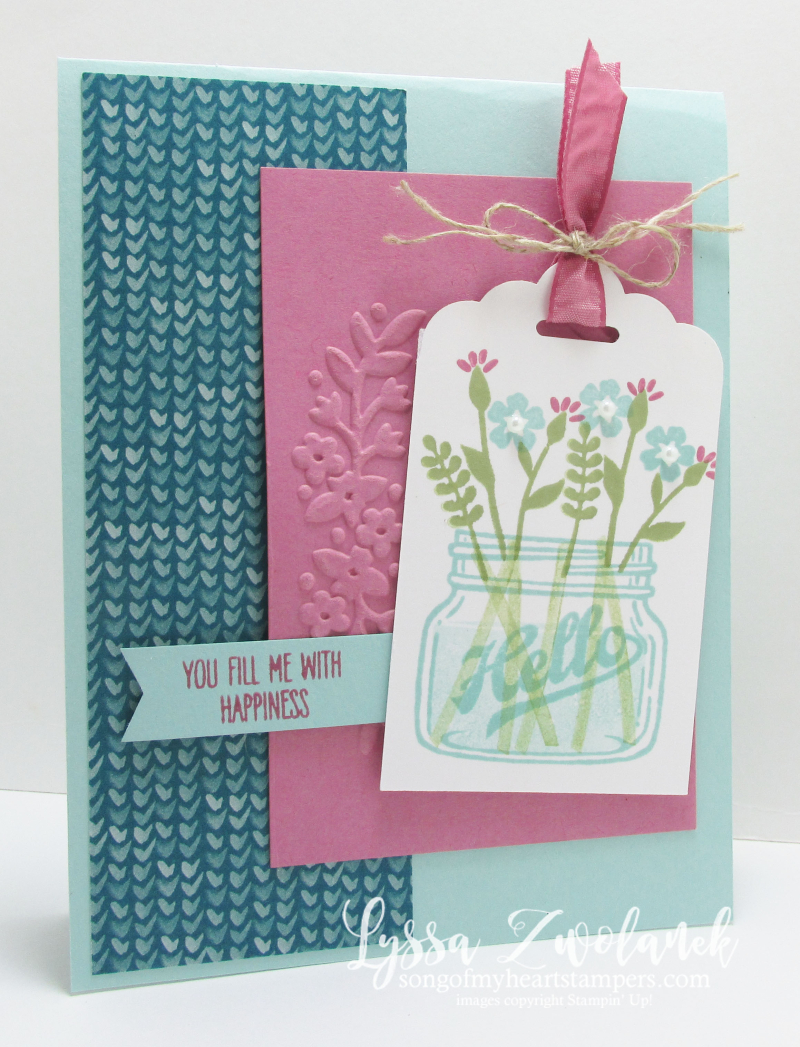 There you have it--four bits of pretty that are headed out into the world this week to work their simple magic, letting people know that friends think of them fondly and often. There are many ways to show someone you care, but one of the best is surely the good old greeting card, humble as a kitchen canning jar, but beautiful on so many levels.

Remember when I had my first "jar" of iced tea. Nothing like it!

I love your cards! I was so bummed when they featured the jar only in the farm fresh stuff just that one holiday catalog. I was ready for more! I used it a lot. So, now I have to have these too. I wish they had the word Ball or Kerr on them just because but then I guess they would have to pay a royalty or something. Any way, your cards are so pretty and fun. I had not seen anyone use the mini embossing folders and now I can see the beauty of them esp. with the first card. The colors you chose are wonderful. I had to laugh about your pearls - well, if you don't use them for awhile, well, you will have them for later. Just don't misplace them like I do! Thanks for featuring this stamp set without the framelits just so we can see the beauty of the set.

I guess I'll have to get rid of my one jar die, and buy these! I really like that there are 3 sizes and such cute ways of putting things in the jars and sayings also. Its on my list!
Great work