for your ears only

"She doesn't realize it was I who gave her everything she has--the grain, the new wine, the olive oil; I even gave her silver and gold. But she gave all my gifts to Baal."
Hosea 2:8

A friend posted this verse to Facebook recently, and it was one of those moments where you read something and you just think ouch and I needed to read that all in the same heartbeat.

The "she," of course, refers to Israel, overflowing with success and abundance, but giving credit for the protection and provision she'd been granted to a false idol and not Yahweh.

I've been thinking a lot lately about my business and the recognition and reward I attained in a relatively short period of time. I didn't break any land-speed records, but the path to the top levels of my company was incredibly fun, and there was not a doubt in my mind that all the work would pay off and the results would be worth it.

I'll never forget that awards night. It had been a great year, and I crossed the stage for many honors. I felt fantastic is my sassy silver and black cocktail dress and silver sandals. My mom was in the audience beaming from ear to ear, my team members and friends cheering like they had lost their minds. And at the end of the evening, the ultimate prize of them all--something that couldn't be earned, but could only be bestowed: a coveted place on an exclusive, hand-picked six-member board, advisory to the corporate team.

If I close my eyes, I can still hear the crowd.

I can still hear my mom's incredulous gasp and feel her grip on my arm.

I can still remember the unexpectedly heavy weight of the roses.

But the roses didn't fill the hole.

I knew before I made it back to my hotel that night, that it wasn't enough. That all I had striven so earnestly for, secretly hoped so long for, had not made me happy. That there was no magic place at the top where I could sit and survey what I had accomplished and finally, FINALLY be content.

Designer bags, exotic trips for two, magazine articles, jewelry, gifts in the little blue boxes from Tiffany's.... none of it made any difference. I took each recognition and accomplishment and praise and threw them down into the gaping pit and the monster ravenously consumed each new bauble I threw down, and whispered, "more."

My need for approval was a god never appeased. I was filling a hole with crumbling mortar. The baubles didn't even begin to fill the emptiness inside of me. There would never, WILL never, be enough approval of man to mask my need to find my identity in Christ alone.

My Father, in lovingkindness unfathomable, knows I am one of those children who has to learn everything the hard way. That it would take me reaching the heights to discover they were not high enough. That I could not learn this lesson from observation, only experience.

And that I would stubbornly resist with everything in me the logical answer that everything so clearly pointed to: all that thrills my soul is Jesus.

Solomon and I have something in common, you see. Yes, I'm talking about the early king of Israel, fabulously wealthy and wise beyond any man before or since. Talk about baubles... here was a man who had every earthly pleasure. Everything money could buy. All eyes fixed on him. He had experienced everything the world had to offer. Anything he could possibly ask for, right at his fingertips.

And it was empty.

Vanity of vanities. The height of nothingness. Completely hollow.

I believe King Solomon and I must have a similar sort of personality. We had a sneaking suspicion where it all was leading, but nevertheless we set our face to the summit and continued climbing. We had to see it for ourselves.

We had to climb and try and strive and fight and finally make it to where the world deems the top, so we could take in that deep breath and know in an instant we were still starving for oxygen.

I've struggled so hard to discover what God wants me to do about this monster. I thought it would be easier just to quit, you know? Cut off the Hydra's head, instantly go back to obscurity. Get a job working somewhere for someone else, something that won't constantly tempt me to compete and excel. I begged God to show me what to do, to open doors, to illuminate a pathway.

But He left me where I am.

For now, at least, I am not allowed to turn my back on it.

This is my testing ground. This is where I learn to put it in perspective.

This is how I learn to re-order my priorities, to practice what I preach, to let the dross burn and make a life that brings glory only to God.

It would have been so much easier to quit.

This thing He is asking of me is so hard. I almost don't see how it is possible. It will require constant effort, daily sacrifice, a permanent replacing on the altar over and over and over again.

Of course it isn't possible. That's the point.

It cannot be done in my own strength. If I am to put my life in the order and priority God wants it to be, He will have to enable me to do so. There will be many course-corrections along the way. And this is the only way it can be done.

Because if I quit, just to get myself off this destructive path, that gaping hole will not be left behind. The ravenous monster may sleep for a while, but it won't be long before I find some other way to get the approval and adulation my emptiness requires. This "easy out" that I long for will only delay the inevitable.

So here I am, rested after six months of health challenges, poised to start returning to the world. I would like to think I'm a different person because of all that's happened, but the fact is, I'm the same old me. Eager to return to what just about killed me. Ready to fall right back into the old paths, the old ways, the old mindset.

How I long for the day when Your throne fills my view. When the creature created for Your praise at last thinks nothing of itself as it sings for Your ears only. 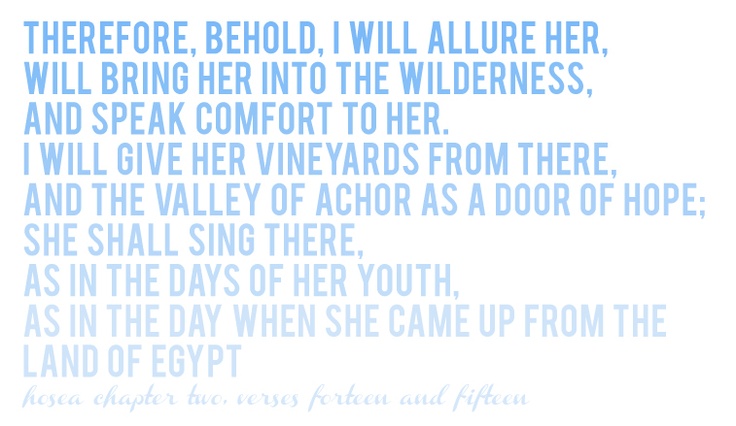 Posted in Failure of Perfectionism , Modern Day Idolatry, Submission to His Will, Wilderness Wandering | Permalink